The hosts of Fox News’ “Fox & Friends” reacted Wednesday to the Christmas tree outside their building being set on fire, blaming the leadership of the “left” and a “crime surge.”

“This is emblematic of the cities out of control, defame and defund the police and this bail reform that has these men and women — these assailants, these suspects — out before they even can finish off the paperwork. This is what you get if you have these left-wing DAs and officials running these major cities. You get chaos,” fumed host Brian Kilmeade.

There is no information on the suspect immediately available and no indication the person was let “out” of a past incarceration. In a memo to staff Wednesday, Fox News Media CEO Suzanne Scott did confirm the suspect was charged with arson and “multiple other crimes” after the fire. 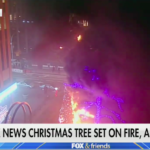 Kilmeade also called the suspect a “psycho” and attributed the fire to a “crime surge” in America, which is already a popular topic on the network.

Ainsley Earhardt took a more future-oriented position, saying, “Someone did this to spoil our Christmas, but that’s not going to happen. This Scrooge is not going to get away with it.”

Indeed, Scott’s memo indicated a new tree will be erected and a second lighting ceremony will take place.

“This has become a new wonderful tradition on Fox Square over the last three years. We will not let this deliberate and brazen act of cowardice deter us. We are in the process of rebuilding and installing a new tree as a message that there can be peace, light and joy even during a dark moment like this,” Scott said.

“What kind of a person lights a Christmas tree on fire?” wondered Steve Doocy, who cited eyewitness accounts and admitted he hadn’t yet read a police report as he described the suspect lighting newspapers on fire to start the blaze. Doocy said the situation was starting to sound like arson, but in her memo, Scott was more straightforward, calling it “a malicious arson attack.”