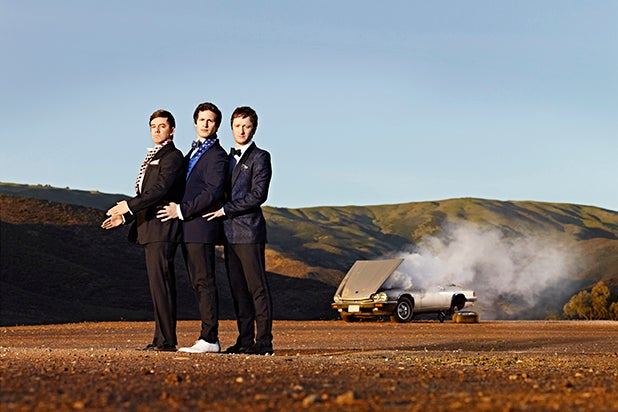 Fox and The Lonely Island unveiled the first three projects under their newly named “Party Over Here” comedy development venture: “The Tyler Zone,” “Home for the Weekend” and “Topics With Andre Hyland.”

“The Tyler Zone” will star “Community’s” Danny Pudi, while “Home for the Weekend” is hosted by Neal Brennan of “Chappelle’s Show.” The third project is from comedian Andre Hyland of “Hollywood & Hyland.”

The three Lonely Island members — Andy Samberg, Akiva Schaffer and Jorma Taccone — serve as executive producers on each project. The series are being developed for distribution via over-the-top video platforms, with the ultimate goal of becoming full half-hour series on Fox, FX, FXX, Fox International Channels or other networks.

More projects in development will be announced in the coming weeks and months.

Additionally, “Party Over Here” has hired Billy Rosenberg (“The Spectacular Now”) to head its development and production.

“We’re delighted with these first projects, the caliber of stories and talent and having Billy on board,” said Kiliaen Van Rensselaer, senior vice president of multi-platform programming for Fox. “Akiva, Andy and Jorma have exceeded our expectations in identifying and nurturing a number of bold new ideas that might not otherwise have been produced through the traditional process.”

Here are the official project descriptions:

“The Tyler Zone”:
When Tyler (Danny Pudi, “Community”) moves to a new town, he finds himself in the middle of a series of supernatural occurrences. Are they really happening, or is it all in his head? Music video and commercial director Keith Schofield wrote and directed this surreal sci-fi comedy.

“Home For the Weekend”:
Hosted by comedian Neal Brennan (“Chappelle’s Show”), “Home for the Weekend” is a mockumentary-style half-hour comedy following a celebrity’s return trip to his or her hometown, where pleasant strolls down memory lane can take unexpected turns and reveal surprising backstories about high-profile stars. The first episode in production features The Lonely Island’s Andy Samberg, Akiva Schaffer and Jorma Taccone back in Berkeley, California, where they grew up.

“Topics With Andre Hyland”:
Comedian Andre Hyland (“Hollywood & Hyland”) morphs into his uniquely hilarious band of characters and interacts with an unsuspecting public. Hyland writes, directs and stars in this outrageous show.