Fox Business Network’s Liz Claman became the latest public figure to speak out after Fox Nation’s Lara Logan compared Dr. Anthony Fauci to Nazi Dr. Josef Mengele. Though she didn’t reference Logan by name, she came out swinging against the instantly-viral comparison on Sunday, almost a week after the incident took place.

After telling her 114,000 Twitter followers that “facts need to be stated,” Claman ran down a list of the cruel experiments Mengele carried out on concentration camp prisoners during the Holocaust: “Nazi Josef Mengele performed experiments on Jewish twins; personally killed 14 twins in one night by injecting their hearts w/chloroform. Performed vivisection without anesthesia, removing hearts and stomachs of victims. Nazi Josef Mengele sewed two twins together, back to back, in a crude attempt to create conjoined twins; both children died of gangrene after several days of suffering. Mengele infected one twin w/disease, transfusing the blood of one twin into the other. Nazi Josef Mengele attempted to change eye color by injecting chemicals into eyes of living subjects, killing those w/heterochromatic eyes so that the eyes could be removed and sent to Berlin for study. Let’s stop w/ANY comparison to Mengele. Dayenu. That’s Hebrew for ENOUGH.”

When a reader told her they wished they hadn’t read her post, the “Claman Countdown” host responded, “I wish I didn’t have to write it. As a Jew I was raised to know what happened and to speak out against such vile evil, including anyone who tries to diminish it. Again, I’m sorry.” 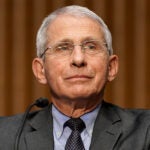 “Exploiting the tragedy of people who became victims of criminal pseudo-medical experiments in Auschwitz in a debate about vaccines, pandemic and people who fight for saving human lives is shameful. It is disrespectful to victims & a sad symptom of moral and intellectual decline,” tweeted the memorial’s official account, which is followed by 1.1 million people.

During an appearance on Fox News last Monday night, the Fox Nation host and former CBS News correspondent compared Fauci, the nation’s leading expert in infectious diseases, to Mengele, who performed deadly experiments on concentration camp prisoners during the Holocaust.

“This is what people say to me: He doesn’t represent science, he represents Dr. Josef Mengele, the Nazi doctor who did experiments on Jews during the Second World War and in the concentration camps,” Logan told Pete Hegseth during “Fox News Primetime.” A banner on the screen read, “FAUCI THINKS HE IS ABOVE CRITICISM.”

Fauci himself called the comments “slanderous” and “disrespectful.”