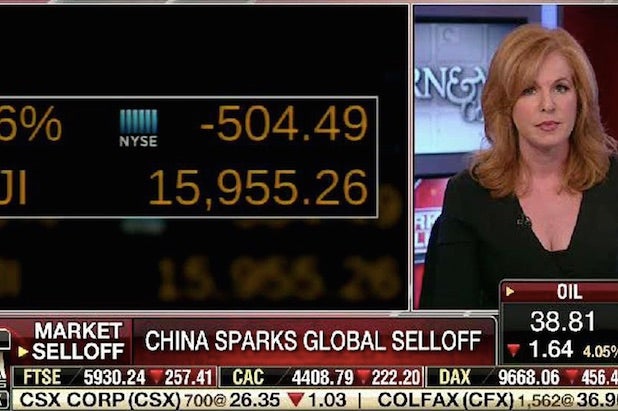 As the stock market roller coaster continued Monday, business journalists were on high alert as they reported on what really warrants panicking and what is just market jitters run amok.

Fox Business’ Liz Claman was on-air throughout #BlackMonday, when the market opened down over 1,000 points before regaining 700 points in an ensuing rally hours later.

Claman said the overall market swoon has a huge impact on media companies, who’ve been taking big losses in August.

“People have woken up and said, ‘I don’t need to pay cable, why do I need that?'” Claman told TheWrap about the cord-cutting phenomenon, pointing to media giants like ESPN recently reporting subscriber cancellations as consumers choose “skinny bundles” over traditional cable.

The impact of this became clearer after Disney lowered its annual profit forecast in August, due in part to ESPN’s losses. The change is great for the consumer, but not so much for media companies which Claman said, “suddenly they have this gigantic, freezing cold jar of water thrown right in their face.”

ESPN benefits from the huge demand for Monday Night Football and other sports like the NBA and Major League Baseball, but isn’t completely shielded. “That’s why people panicked: if ESPN is feeling it, it must be affecting everybody.”

And Viacom, which was one of the big early-August Wall Street losers and has been punched in the gut with the losses of Jon Stewart and Stephen Colbert, is vulnerable in the short term, but the natural order of TV suggests it’s long-term future is bright.

“Something blooms and dies and then something else blooms again,” she continued. “Individual shows are not big enough to kill a network. But individual shows going away, plus a market sell-off, plus the concerns about cord-cutting create an atmosphere that really creates a chill throughout media stocks.”

Beyond the short-term threats to media companies, Claman cautioned against the growing trend of media consolidation.

“Some will win, some will lose,” she said about digital and social media-oriented deals forming between legacy media giants like NBCU and digital powerhouses like BuzzFeed and Vox.