Tucker has in past episodes of “Tucker Carlson Tonight” said that young, healthy people don’t need the coronavirus vaccine, alleged Dr. Anthony Fauci helped create COVID-19 in a lab and coronavirus vaccines kill people. All of that is untrue, and Factcheck.org recently debunked several of Tucker’s statements.

But Lachlan — son of Fox Corp. chairman and conservative media mogul Rupert Murdoch — told Business Insider May 18 that he didn’t think there was anything wrong with Tucker’s claims. Rupert’s other son, James, quit the family business at Fox last summer because he said he didn’t support in the company’s editorial decisions anymore.

“He basically just went into the CDC data, right?” Lachlan told Insider about Tucker.  “So there’s nothing the CDC itself isn’t saying.” 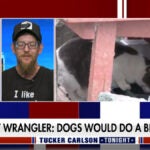 Lachlan also said that he thinks Fox News isn’t as far-right as some people might consider it to be. “Trump was attacking us nonstop, and we didn’t bend to that,” Lachlan told Insider, referring to the time Trump briefly turned his back on what is typically his favorite network when they called President Joe Biden as the winner in the 2020 election before other outlets did.

“Trump was attacking us nonstop, and we didn’t bend to that,” Lachlan told Insider. “Obviously our opinion is center-right. We held our own. We were happy with where we were. In a strange way, if you’ve got the left and the right criticizing you, you’re doing something right. You really are in the middle.”

Lachlan is a staunch defender of Tucker. He backed the Fox News host in April when people reprised calls for advertisers and viewers to boycott Tucker’s show after a segment on “replacement theory,” or the idea that having more immigrants in America prevents Republicans from winning elections. At the time the Anti-Defamation League and its CEO Jonathan Greenblatt decried Tucker’s statements as “racist and toxic.”

Lachlan then wrote to Greenblatt and said he “respectfully disagreed” with Greenblatt’s take on Tucker’s comments.

“A full review of the guest interview indicates that Mr. Carlson decried and rejected replacement theory,” Lachlan said. “Fox Corporation shares your values and abhors anti-Semitism, white supremacy and racism of any kind. In fact, I remember fondly the ADL honoring my father with your International Leadership Award, and we continue to support your mission.”

Greenblatt wasn’t moved and replied back, “as you noted in your letter, ADL honored your father over a decade ago, but let me be clear that we would not do so today, and it does not absolve you, him, the network, or its board from the moral failure of not taking action against Mr. Carlson.”