Doocy encouraged viewers to vaccinate their kids over the age of 12, causing Kilmeade to interject, “Right, or see a doctor and decide what you want to do. That’s who usually, people, go to for medical advice: doctors.”

Doocy, who has been vocal about his own vaccination and participated in Fox News PSAs urging viewers to get the shot, remarked that he hadn’t consulted with a doctor before getting his own jab, but Kilmeade maintained, “I don’t think anchors should be recommending medical advice.” 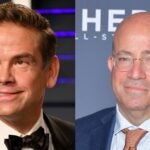 “A lot of people have been tuning into the show for 25 minutes to see what we think about things,” shot back Doocy. “I think if you have the opportunity, get the shot.”

Co-host Ainsley Earhardt sided with Kilmeade, who has been countering Doocy’s pro-vaccine stance with talk of choices and decisions for weeks.

The spat comes as Fox News faces scrutiny for its opinion hosts’ coverage of vaccination. While anchors like Harris Faulkner and John Roberts have hosted town halls and participated in PSAs, primetime host Tucker Carlson has received significant ire for his just-asking-questions approach to vaccine contrarianism.

Watch the moment above, via Fox News.