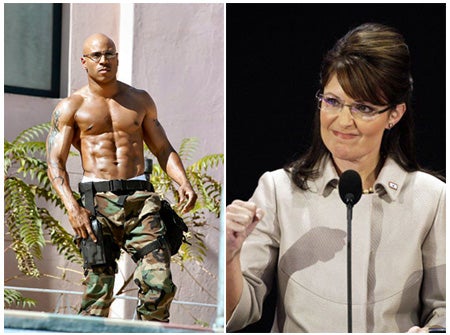 When Fox News hired Sarah Palin as a contributor, the network didn’t give the former Alaskan governor her own show (Discovery did that); rather, Fox said she would be the host of a series of specials featuring inspirational stories.

The first one – scheduled to air Thursday – was supposed to feature a segment on L.L. Cool J. But when the Grammy-winning rapper caught wind of it, he lashed out – where else? — on Twitter.

"Fox lifted an old interview I gave in 2008 to someone else & are misrepresenting to the public in order to promote Sarah Palins Show. WOW”

"Real American Stories features uplifting tales about overcoming adversity and we believe Mr. Smith’s interview fit that criteria," a network spokesperson told TVNewser.com. "However, as it appears that Mr. Smith does not want to be associated with a program that could serve as an inspiration to others, we are cutting his interview from the special and wish him the best with his fledgling acting career."

Repurposing old footage is common practice in cableville. E!, VH1 – even Fox News itself – are known to do this, usually without incident. Usually.

Last year, the Daily Show called Fox out for repurposing footage to make a tea party rally look to be bigger than it actually was. The network quickly apologized.