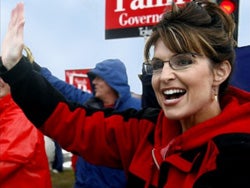 As expected, Discovery Communications has inked a deal with Sarah Palin for the rights to "Sarah Palin’s Alaska," an eight-part documentary about the former governor and vice presidential hopeful.

The eight-hour series, produced by Mark Burnett, will premiere on Discovery’s TLC.

Terms were not disclosed, but according to one report, Discovery was willing to pay up to $1 million per episode for the series.

(Silver Spring, Md.) Discovery Communications has acquired the global rights to SARAH PALIN’S ALASKA (wt), a new eight-part documentary series about the remarkable Governor Palin and her home state of Alaska. Slated to premiere on TLC, the series will be executive produced by Emmy-award winner Mark Burnett of Survivor and Apprentice fame.

"Our family enjoys Discovery’s networks," said Governor Sarah Palin. "I look forward to working with Mark to bring the wonder and majesty of Alaska to all Americans."

"Discovery Communications is so excited to help Sarah Palin tell the story of Alaska, and to have a great documentary filmmaker in Mark Burnett helping to reveal Alaska’s powerful beauty as it has never been filmed, and as told by one of the state’s proudest daughters," said Peter Liguori, Chief Operating Officer, Discovery Communications.

The series reunites the company with Mark Burnett Productions, which co-produced ECO-CHALLENGE, the precursor to Survivor, for Discovery Channel from 1996-1999.

"With a dynamic personality that has captivated millions, I can’t think of anyone more compelling than Sarah Palin to tell the story of Alaska," said Mark Burnett. "I’m thrilled to reunite with Discovery on this project, which brings together one of the most fascinating figures of our time with one of the most wondrous places on earth."