Fox News responded Saturday to backlash over a graphic it aired Friday that compared assassinations and killings in the black communities and the effect they had on the stock market.

“The infographic used on Fox News Channel’s ‘Special Report‘ to illustrate market reactions to historic periods of civil unrest should have never aired on television without full context. We apologize for the insensitivity of the image and take this issue seriously,” a Fox News spokesperson told TheWrap.

The graphic — which came as unrest and protest continued in numerous American cities in the wake of the killings of George Floyd, Ahmaud Arbery and Breonna Taylor — used a bar graph to show the percentage of change in the S&P 500 one week after Martin Luther King Jr.’s assassination, the acquittal in the Rodney King case, Michael Brown’s death and Floyd’s death. 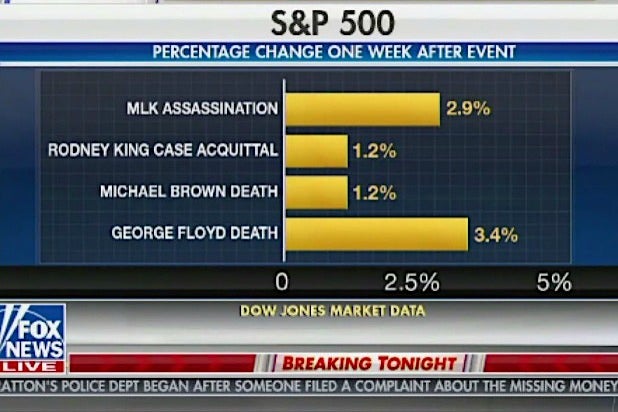 The network’s use of the graph was condemned on Twitter Friday, as users expressed their inability to believe it even ran. Some viewers’ displeasure with Fox News’ opinion programming overall lent itself to a trending hashtag: #FoxNewsIsRacist. Many of the tweets in the tag featured the graphic in question.

This is a horrific graphic to have put up on air.

Who thought this was a good idea. Wtf.

Not often I'm speechless but what the fuck. https://t.co/Vjk78LYRLZ