Fox News’ Sean Hannity, Laura Ingraham and Brian Kilmeade were all on air after Rep. Liz Cheney revealed publicly that they texted the White House chief of staff on Jan. 6, urging him to get then-President Donald Trump to halt the Capitol riot. None of the three hosts mentioned their texts.

Hannity even had the former chief of staff, Mark Meadows, on his 9 p.m. ET program Monday night, and while the two discussed the Congressional hearing from earlier in the day in which the texts were read, the messages themselves were unaddressed. Ingraham did not broach the topic during her 10 p.m. show, either. On Tuesday morning’s “Fox & Friends,” Kilmeade and his co-hosts also failed to bring the correspondence up. 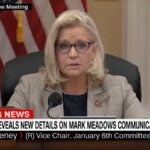 Also Read:
Fox News’ Sean Hannity and Others Urged Trump to Act on Jan. 6 in Texts to Mark Meadows (Video)

The House select committee is investigating the Capitol riot and proceeding with holding Meadows in criminal contempt on Congress for not complying with a subpoena. Cheney read the text exchanges aloud during the hearing. One from Ingraham said, “The president needs to tell people in the Capitol to go home. … He is destroying his legacy.”

Another text from Hannity to Meadows on the same day said, “Can he make a statement?… Ask people to leave the Capitol?”

The private messages matched up with some of what the hosts said on-air during that tumultuous time. Hannity condemned violence while Kilmeade said Trump’s suspension from Twitter, which was a result of the company finding he used the platform to incite the riot, was justified.