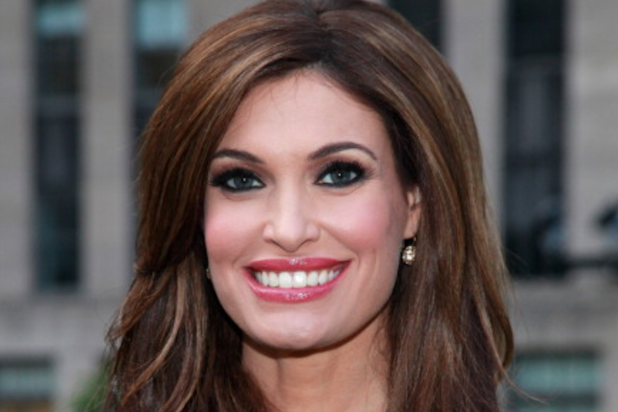 Fox News host Kimberly Guilfoyle told the Bay Area News Group that she is in conversations with the Trump administration about potentially joining the communications team, according to the Mercury News.

Guilfoyle, who co-hosts “The Five,” was recently moved to primetime but would apparently consider giving it up to serve her country and the role could even include replacing Press Secretary Sean Spicer, the Mercury reported.

“I’m a patriot, and it would be an honor to serve the country,” Guilfoyle told theBay Area News Group (via the Mercury). “I think it’d be a fascinating job, it’s a challenging job, and you need someone really determined and focused, a great communicator in there with deep knowledge to be able to handle that position.”

Guilfoyle is also the former first lady of San Francisco who was married for four years to former San Francisco mayor and current Lt. Gov. Gavin Newsom. She was widely thought to be a finalist for the role of press secretary during the transition period but Trump ultimately chose Spicer.

Just last week, Guilfoyle talked on air about the role of press secretary on the heels of rumors that Trump was unhappy with Spicer’s performance.

“If you want to be successful and do communications with President Trump, you have to be someone who he actually wants to spend a little bit of time with,” Guilfoyle said on “The Five.”

She continued: “You’ve got to insist on getting in front of POTUS, talk to him, and have like five, six minutes with him before you go out there and take the podium, and otherwise you’re driving blind… It has to be somebody with a very close relationship, where there’s trust there, there’s inherent loyalty, someone who’s been there from the beginning.”

In her recent interview with the Bay Area News Group, the Fox News star said she has the type of relationship with the president that is needed to thrive in the press secretary role.

“I think I have a very good relationship with the president,” Guilfoyle said. “I think I enjoy a very straightforward and authentic, very genuine relationship, one that’s built on trust and integrity, and I think that’s imperative for success in that position.”

“The Five” is one of the most-watched shows on cable news, but non-FNC viewers might recognize Guilfoyle’s name because of recent comments she made while attempting to defend the president when rapper Bow Wow threatened the First Lady on Twitter.

Guilfoyle was asked what the Secret Service should do about it. “Kill them,” she responded. “I think it would be fantastic if Snoop and wannabe-Snoop got a visit from, like, the federal marshals, and let’s see how tough and gangster they are then.”

“Yeah, sure. He is. Well, he’s doing a good job but he gets beat up,” Trump said. “He just gets beat up by these people and again you know they don’t show the 90 questions that they asked and answered properly.”

Spicer has emerged as a household name because of his often-combative press briefings and high-profile gaffes. He is famously portrayed on “Saturday Night Live” by Melissa McCarthy and it will be curious to see how late-night shows handle Guilfoyle if she takes on the role.