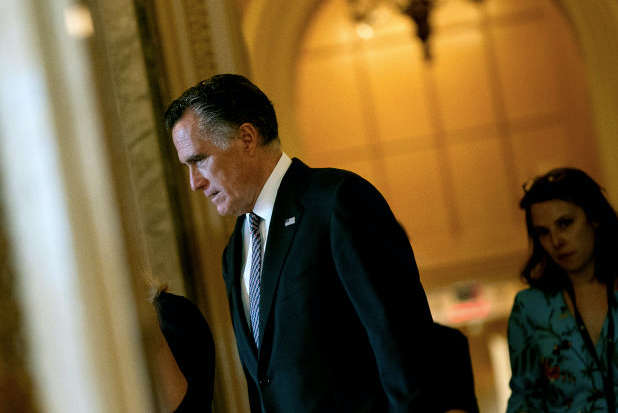 “Romney is going to be associated with Judas, Brutus, Benedict Arnold forever,” Dobbs said. On Twitter, the host, who recently celebrated some major ratings wins, called Romney a RINO, or “Republican in Name Only.”

Other Fox News hosts, too, voiced displeasure with the Utah politician, who became the first senator in history to vote for conviction of an impeached president in his own party.

In Fox News’ primetime Wednesday night, both Tucker Carlson and Laura Ingraham used the word “preening” to describe Romney’s action, which was preceded by a speech announcing his intention to vote for conviction. Sean Hannity, another Fox News figure with big ratings news this week, called Romney a “diminished figure.”

“The difference between him and Donald Trump is Donald Trump fought every single day, was tough and tough enough to win,” said the host.

Romney gave his only televised interview about the vote to Fox News’ Chris Wallace Wednesday, just a few hours before the primetime analysis rolled in, telling the “Fox News Sunday” anchor that when it came time to make the decision, he had to follow his “conscience.”

“I understand there’s going to be enormous consequence and I don’t have a choice in that regard. That’s why — that’s why I haven’t been anxious to be in the position I’m in,” he said at the time.

The Senate voted to acquit Trump on both articles of impeachment against him Wednesday, ending the months-long saga that began when House Speaker Nancy Pelosi announced the impeachment inquiry last fall.

Thirty-four “not guilty” votes were needed for each article to acquit Trump. Senators voted 52-48 in favor of acquitting the president of the first article of impeachment — abuse of power. They voted 53-47 in favor of acquitting him on the second article — obstruction of Congress. In December, the House impeached Trump on both charges. The House voted on the two articles of impeachment, drafted by the House Judiciary Committee.