Eight celebrities will attempt to recreate the legendary lift and other moves from 1987’s “Dirty Dancing” in Fox’s new celebrity dance competition, “The Real Dirty Dancing” and be crowned “Baby” and “Johnny,” after the iconic characters played by Jennifer Grey and Patrick Swayze.

On Wednesday, Fox revealed when the show will premiere.

Stephen “tWitch” Boss, an All-Star and judge on Fox’s “So You Think You Can Dance,” will host the special event series, which will air on Tuesdays in February. 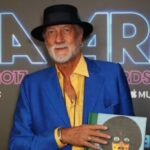