Fox will not be ringing in 2022 from Times Square. The network said on Tuesday that it has canceled its planned broadcast from New York City on New Year’s Eve due to the surge of the Omicron variant of COVID-19.

Fox will air replacement programming instead.

“While we are confident in the health and safety protocols for ‘Fox’s New Year’s Eve Toast & Roast 2022,’ the recent velocity of the spread of Omicron cases has made it impossible to produce a live special in Times Square that meets our standards,” Fox Entertainment said in a statement. “We will not be moving forward with ‘Fox’s New Year’s Eve Toast & Roast 2022,’ in New York.  The health and safety of our casts and crews has always been, and will continue to be, of the utmost importance.  Replacement programming for New Year’s Eve on Fox will be announced in the coming days.” 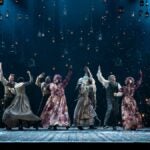 Fox becomes the first network to scrap its plans for New Year’s Eve, a year after Times Square was completely empty to ring in 2021. Up until the Omicron surge that began recently, networks had hoped to return to a more normal NYE affair.

New York City in particularly has been hit hard by the latest surge of the virus which has been largely driven by the hyper-contagious Omicron variant. New York City reported more than 12,000 positive cases on Monday, a day after reporting 18,000 new infections. The seven-day positivity rate is above 8,000 cases, the highest of the 2-year-old pandemic in the city. There has been early data out of South Africa, where the variant was first discovered, that shows Omicron may be milder overall, even as it spreads at a rapid pace.

The CDC said Monday Omicron counts for 75% of all cases in the U.S.