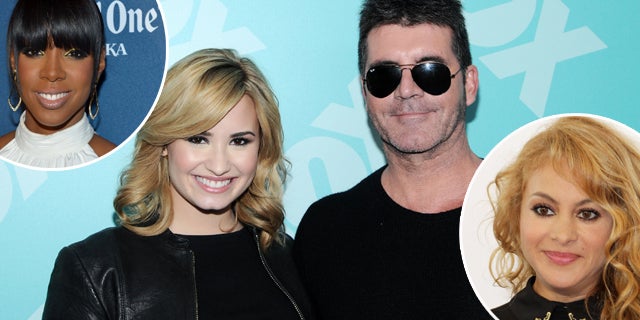 It's girl power on the third season of Fox's "The X Factor" as Simon Cowell finds himself as the lone male judge.

“It’s taken more than a decade but I’m delighted to finally be on a panel with three girls (I think!)," Cowell said in a statement.

"Paulina and Kelly both have great taste and massive experience in the music industry and together with Demi, this is going to be a fun panel. It just feels like the time to do something different.”

A source close to negotiations told TheWrap that Rowland's deal closed earlier on Monday. Paulina's legal team flew to Los Angeles on Monday afternoon and just finalized the deal within the last hour.

“I am very excited to be reuniting with Simon Cowell and 'The X Factor' family,” said Rowland. “It feels great to be able to take this journey here at home in the states!”

Added Rubio: “I love 'The X Factor'! I can’t wait to find the next big music star here in America,” added Rubio. “I’m so thrilled to be part of the show as a judge. Simon, be careful what you wish for, let’s see if you are ready to handle me, empieza la fiesta, amigo!”

After original judge L.A. Reid and Season 2's Britney Spears left the series last season, the show has changed its strategy, a person with knowledge of the production's plans told TheWrap. Instead of casting judges on merely name alone, it also looked at chemistry with returning judges Lovato and Cowell.

Additionally, Mario Lopez will return to host the show. It's unclear whether the production is considering a replacement for booted Season 2 co-host, Khloe Kardashian.

Shooting begins on Tuesday with the first day of auditions in Charleston, S.C. Season 3 premieres this fall.

Aside from her tenure as part of hit girl group, Destiny's Child, Rowland, 32, has sold more than 24 million albums worldwide as a solo artist. She has also been featured on top hits with rapper Nelly and DJ David Guetta. Her new solo album, "Talk a Good Game," releases on June 18.

Rubio has sold more than 20 million albums worldwide. The 41-year-old brings with her the experience of coaching "The Voice Mexico" and Telemundo's upcoming Spanish-language "The Voice Kids."

Talent shows have been seeing a decline in viewership in the last several years. "The X Factor" famously undershot Cowell's desire for 20 million viewers for Season 1, averaging about 11 million viewers per episode. Its second season finale attracted about 9.7 million viewers.