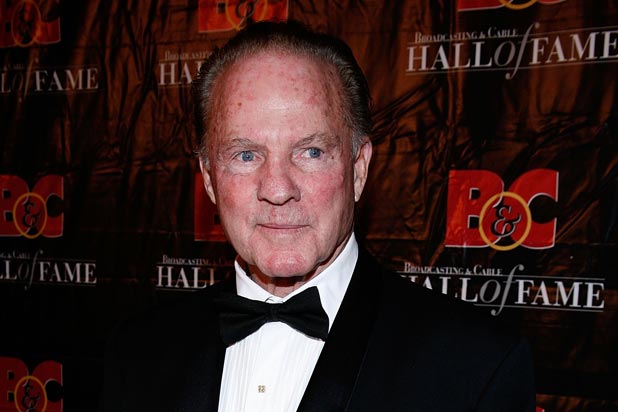 Gifford is the husband of “Today” show host Kathie Lee Gifford, who he married in 1986. The couple has two children together, in addition to Frank’s three kids from a previous marriage.

“It is with the deepest sadness that we announce the sudden passing of our beloved husband, father and friend, Frank Gifford. Frank died suddenly this beautiful Sunday morning of natural causes at his Connecticut home,” the Gifford family said in a statement.

“We rejoice in the extraordinary life he was privileged to live, and we feel grateful and blessed to have been loved by such an amazing human being. We ask that our privacy be respected at this difficult time and we thank you for your prayers.”

Kathie Lee Gifford tweeted that she was “deeply grateful to all” for the outpouring of condolences by friends and fans.

Deeply grateful to all 4 ur outpouring of grace. We r steadfast in our faith & finding comfort in knowing where Frank is. Phillippians 4:13.

“I am terribly saddened by this sudden news. Frank Gifford was, is and always will be Mr. ‘Monday Night Football.’ He brought a warmth and genuine nature, and a player’s perspective to the booth that few have or will ever match,” current ESPN “Monday Night Football” voice Mike Tirico told TheWrap. “He was so generous with all of us at ESPN as we became the stewards of ‘Monday Night Football.’ I am thankful for the time that we got to visit with, be around and share the greatness of Frank. My thoughts and prayers to Kathie Lee and his family. We’ve lost a true Giant.”

“Frank Gifford was an exceptional man who will be missed by everyone who had the joy of seeing his talent on the field, the pleasure of watching his broadcasts, or the honor of knowing him,” Bob Iger, chairman and chief executive offficer, The Walt Disney Company, added. “His many achievements were defined by a quiet dignity and a personal grace that is seldom seen in any arena; he truly embodied the very best of us.

Iger concluded: “Frank’s contributions to ABC Sports and our company are immeasurable. We are honored to call him a Disney Legend and I am very fortunate to have called him a dear friend and colleague. Our thoughts and prayers are with his family at this difficult time.”

Gifford played with the New York Giants his entire NFL career, spanning 1952 to 1964. He was selected for the league’s all-star game — the Pro Bowl — eight times. In 1956, he was named league MVP and lead the team to a championship — that was before the big game was officially called the “Super Bowl.”

The New York Giants halfback and wideout great was nominated for Primetime Emmys in 1974 and 1976 for his work on “Monday Night Football,” which was on ABC at the time and currently resides on ESPN. In 1997, Gifford was honored with the Lifetime Achievement Sports Emmy Award.

Gifford also dabbled in acting, and after his playing career appeared on TV’s “Spin City” and “Coach” as himself. He was also in feature film “Jerry Maguire.” Before his pro football career, the handsome Gifford had bit parts in other Hollywood productions, playing characters.

“Frank Gifford was an icon of the game, both as a Hall of Fame player for the Giants and Hall of Fame broadcaster for CBS and ABC,” NFL Commissioner Roger Goodell said. “Frank’s talent and charisma on the field and on the air were important elements in the growth and popularity of the modern NFL. He was a great friend to everyone in the league, a special advisor to NFL commissioners, and served NFL fans with enormous distinction for so many decades. We will always remember Frank’s contributions and miss his friendship. Our hearts go out to Kathie Lee and the entire Gifford family.”

“Frank Gifford was the ultimate Giant. He was the face of our franchise for so many years,” Giants President John Mara stated. “More importantly, he was a treasured member of our family. My father loved him like a son and was proud to act as his presenter for the Pro Football Hall of Fame, a favor Frank returned years later by presenting my father in Canton. For my siblings and me, Frank was like a revered older brother whom we looked up to and admired. We loved him and will miss him terribly.”

“Not only was Frank a member of the Giants family from the time he left USC, and will be forever, but because Frank, my father (Bob) and Pete Rozelle were so close in the ’60s, I felt like he was a member of my family,” Steve Tisch, team chairman added. “I always loved seeing Frank on our sideline before our games. He had the handshake of a 25-year old, and he looked you right in the eye with his big blue eyes. He was such a strong person in every way. He will be missed and will always be remembered as a Giants’ Giant.”

Gifford finished his NFL playing career with 34 rushing touchdowns and 43 receiving scores. He had more than 9,000 total yards combined from scrimmage. The University of Southern California alum was born in Santa Monica, Calif. and played his high school ball at local Bakersfield.

Before heading to ABC for “Monday Night Football,” Gifford called games for CBS. Later, at ABC, Gifford also covered the Olympics and worked on the network’s “Wide World of Sports.”

Gifford was a published author as well.