If it seems America has never stopped debating the ins and outs of the Civil War — South Carolina’s government and the Confederate flag parted ways only last year — then writer-director Gary Ross has good reason to believe his new movie “Free State of Jones” would keep the conversations going, whether moviegoers take to it or not.

The real story, which Ross valued enough that he annotated his movie with notes onscreen and a fully-sourced companion website, is certainly complex enough to defy categorization. But the movie also doesn’t entirely escape an arid, educational quality, coming off mostly as a curious hybrid of the best and the regrettable in right-side-of-history cinema.

We meet Newton Knight on the battlefield as a Confederate Army medic tending to wounded soldiers, and railing against a war he not only disavows morally but also sees as a rich man’s battle fought by poor folk like himself. After witnessing his terrified nephew (Jacob Lofland, “Mud”) shot, and failing to save him, Newt becomes a deserter, returning to his wife Serena (Keri Russell) and child, only to learn that Confederate cavalry and tax agents routinely commandeer his struggling neighbors’ harvests, livestock and provisions for the war effort. 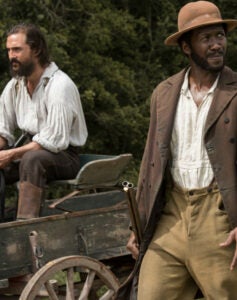 Following an armed standoff against a snarling lieutenant (Bill Tangradi, “Argo”), Newt officially becomes a wanted man, fleeing into the swamps with the help of a kind, sweet plantation servant named Rachel (the ever-appealing Gugu Mbatha-Raw, “Belle”) who first caught Newt’s eye when she once tended to his sick boy.

There, in a tiny camp of Maroons, he meets Moses (Mahershala Ali), an escaped slave still shackled to a hideous crook-pronged neck collar, and the pair form a bond. Soon, with caches of smuggled-in rifles and a growing influx of local deserters fed up with the Confederacy appropriating their property and conscripting their kin, Newt becomes a de facto Southern Unionist leader to this ragtag mixed-race outfit, committed to raiding plantations, re-seizing stolen crops, and fighting all who dare to end their rebellion. At the captured town of Ellisville, their hundreds-strong group declares themselves a free state, with Newt announcing that one of their key principles is “every man’s a man.”

Judging by a surviving photo of the real Newton Knight shown at the end, McConaughey’s just the kind of wild-eyed force to bring his zealotry to life. The go-to star for Southern gadflies is mostly in control of his sometimes infuriating in-the-moment vibe, believably depicting a good, simple man drawn to a cause he’s making up as he goes along. But Ross doesn’t always make Newt’s heroic motivations clear, and it leaves a small enough hole that becomes increasingly hard to ignore. The fact that there aren’t any other memorably rendered characters to truly bounce off of McConaughey, despite a talented ensemble, only serves to stress this cryptic deficiency in the screenplay, whipping as it does through many years, and the movie’s central performance.

And if this all sounds like one more “white savior” movie, it is, even if it hews closer to the “Glory” model of admirably gripping, painstakingly recreated outlier history than the “Cry Freedom” brand of dull, tone-deaf nobility. There are choices Ross makes that push his hero even more into white-knight mode than necessary, whether it’s showing him help Rachel learn to read when we’ve already seen her at the plantation sneaking glances at the owner’s children’s lessons, or, after the war, having Newt literally walk freed blacks into a hostile polling place to ensure their federally granted voting privileges.

(Early on, Ross does give Moses one choice bit of perspective-correcting dialogue. When Newt, marveling at Moses’ harsh collar, says, “I guess you can get used to anything,” Moses quietly retorts, “No, you can’t.”)

Still, there’s a good deal here worth chewing on as a dramatic slice of little-known righteousness, especially when Ross solemnly wades into the Reconstruction — the movie’s best sequence, tonally — and shows how quickly and easily sham laws coupled with private, hooded vengeance could bring an updated tinge of fear and unfairness to the newly unchained.

Less effective, however, are Ross’s use of footnote text (in Ken Burns-regulation font no less), and the occasional flash forward to a 1948 court case in which Newt’s white-looking great grandson David (Brian Lee Franklin) is arrested for miscegenation by attempting to marry a white woman. As a slow, across-the-eras reveal that Newt and Rachel eventually lived together as man and -law wife (and that the struggle never really ended), it nevertheless plays more like a twist from a PBS documentary with recreations than an urgent drama about defiant activists falling in love against all odds.

If “Free State of Jones,” its firelit confabs, rural greenery and Southern heat nicely captured by cinematographer Benoit Delhomme (“The Theory of Everything”), has a standing flaw, it’s born of good intentions: the need to teach, and the fear of turning the past into melodrama. That you may learn a good deal about an unusually driven man, but never quite feel emotionally connected to him, means Ross has hit a workmanlike middle, crafting a handsome textbook more than a blood-pumping portrait.