Emmanuel Macron, the President of France, has paid tribute to a French journalist killed in Ukraine.

Macron confirmed the news of Frederic Leclerc-Imhoff’s death on Monday.

Macron continued: “I share the sorrow of the family, loved ones and colleagues of Frédéric Leclerc-Imhoff, to whom I address my condolences.” 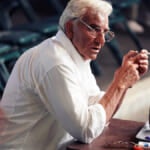 Leclerc-Imhoff was 32, and worked as a cameraperson for BFMTV. The station also tweeted their condolences to his loved ones calling him a “courageous” journalist.

He had worked for the company for six years. The two colleagues he was traveling with at the time, and reporting the news, are alive and safe, the outlet confirmed.

In a statement to CNN, BFMTV, an affiliate for the U.S. news network, said Leclerc-Imhoff was killed by shrapnel.

“He was victim of a shrapnel, while he was following a humanitarian operation in an armored vehicle, this Monday. He was accompanied by his colleague Maxime Brandstaetter, who was slightly wounded in this strike, and their ‘fixer’ Oksana Leuta, who was not hit,” the statement read.