“Fresh Off the Boat” fans may have been thrilled at the news of the ABC sitcom’s renewal for next season, but star Constance Wu apparently was not.

She was even blunter in response to a follower who said that the pickup was “great news”: “No it’s not,” she wrote in a now-deleted reply.

Also Read: 'Fresh Off the Boat,' 'Bless This Mess' Among 5 Shows Renewed at ABC 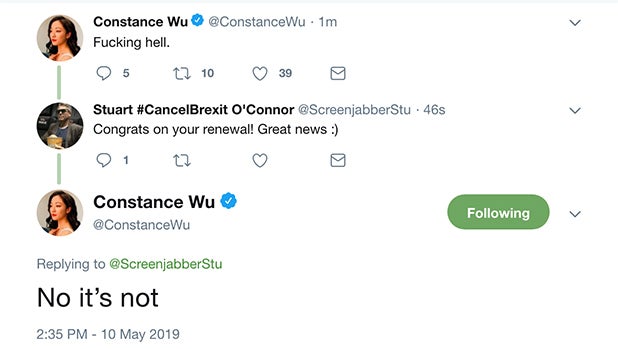 Wu later walked back the tweets, clarifying that it “was not a rampage.”

“Y’all are making a lot of assumptions about what I was saying,” she wrote. “And no, it’s not what it’s about. No it’s not..what this is all about. Stop assuming.”

ABC announced on Friday that “Fresh Off the Boat” would return for a sixth season in the fall. The show, created by Nahnatchka Khan based on the best-selling memoir by chef Eddie Huang, recently surpassed its 100th episode and had been widely considered to be on the bubble.

Wu has been with the show since the beginning, and quickly became its breakout star. Last fall, she starred in the hit romantic comedy “Crazy Rich Asians,” directed by John M. Chu, after nearly missing out on the role because of a conflict with her schedule for “Fresh Off the Boat.”

She is next set to star in the stripper comedy “Hustlers” alongside Jennifer Lopez, and Warner Bros. has a “Crazy Rich Asians” sequel currently in development.

Also renewed Friday were “American Housewife,” freshman comedies “Bless This Mess” and “Single Parents.” On the comedy side, “Black-ish,” “The Conners,” and “Modern Family” had previously been renewed.

Wu also commented “Dislike” on the show’s Instagram account where it announced the news of its renewal. 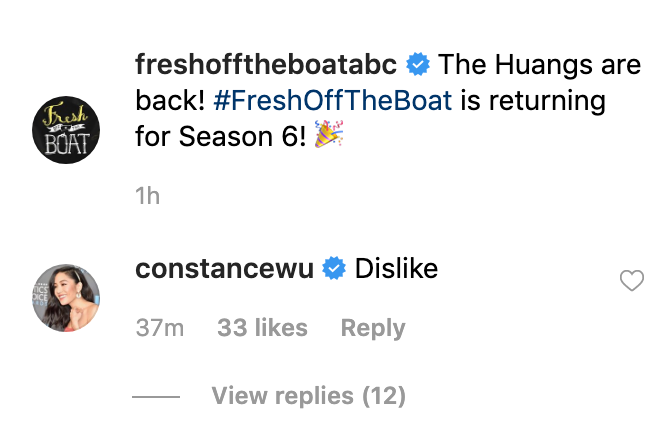