It is not on pace for the $50 million-plus five-day opening some had projected, but Sony’s Michael Jackson concert film "This Is It" is leading the weekend box office, having taken in $7.9 million Friday playing at 3,481 locations.

Studios and exhibitors will venture into the dark, mysterious unknown during this upcoming Halloween weekend. 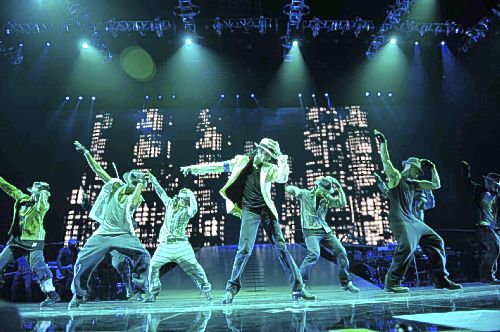 ncert film, “This Is It,” rolled out globally Tuesday evening and is the weekend’s only new wide release.

In terms of new competition, the only other new film opening in more than three theaters is the Apparition-distributed “Boondocks Saints II: All Saints Day.” Troy Duffy’s follow-up to his 2000 cult film will open in 68 theaters Friday.

On Wednesday, its first full day in theaters, "This Is It" took in just $7.4 million at 3,481 North American locations, a performance generally considered disappointing by the broader community of studio distribution executives, who had projected the movie would start out in the $10 million-$12 million range.

“It’s definitely a lower-than-expected opening day,” confirmed one rival-studio official. “But the jury is still out on the five-day total. And (Thursday’s) numbers are actually not bad; they’re only off 45 percent. If that holds and Friday is solid, then I think it could be very respectable.”

But even though Twitter chat regarding the film appeared mostly upbeat Wednesday, and critical reception wasn’t bad (the movie has a 65 Metacritic score), its road to respectability is fraught with peril.

Taking in $2.2 million domestically via its Tuesday late-night runs, the Jackson movie is about a quarter to the way to reaching the $40 million domestic bar Sony officials had privately hoped to surpass in the film’s first five days.

Comparable models are hard to come by, since most recent concert films have been released on Fridays. However, ticket sales for such movies historically have been front-loaded. Disney’s “Hannah Montana: The Movie,” for instance, took in more than half of its $32.3 million three-day opening last April on its first day.

Meanwhile, other event films released on Wednesdays that were neither summer or holiday performed much better. “The Passion of the Christ,” for example, took in $26.6 million on a Wednesday in February 2004.

Should “This Is It” perform over the weekend to the low side of domestic projections, which tend to be around $20 million, giving Sony a five-day total of just over $30 million in North America, the studio’s hopes for profitability would hardly be dashed.

Indeed, for Sony, which paid $60 million to license global distribution rights for “This Is It’ from concert promoter AEG Live, foreign sales should carry the day.

The film took in $12.7 million internationally Wednesday, Sony reported, and it opened up in 10 additional territories Thursday.

Meanwhile, with Jackson’s brand firmly established and the film widely publicized, a Sony official said the studio paid about 40 percent of its usual on such a globally released movie for prints and advertising (that would typically run about $50 million).

On the other hand, AEG – which is hoping to make back the more than $30 million it spent to produce the concert Jackson never was able to play – probably will come away from the film’s opening a bit let down, with one official earlier in the week offering a mesmerizing five-day global projection of $250 million.

“I’m not sure about the international piece,” another rival distribution executive noted, “but one thing is clear: it won’t perform to AEG’s expectations.

”With distributors ducking both “This Is It” and the downer Halloween weekend, Paramount is looking to sustain the groundbreaking momentum of incumbent box-office champion “Paranormal Activity,” which will ramp up to 2,402 theaters from 1,745.

Several studio distribution units reached out to by TheWrap predict a three-day weekend of just over $15 million for the microbudgeted R-rated horror film, which would represent the first drop for the film since it started out with a dozen midnight runs a month ago.

However, one projection had the movie narrowly surpassing its $22 million take from last weekend and once again leading the domestic box office.