Not all that is 3D opens huge.

The DreamWorks Animation-produced, Paramount-distributed "How to Train Your Dragon" got off to a so-so start at the domestic box office Friday, taking in $11.4 million, according to studio estimates.

Opening at 2,178 theaters — an accomplishment for Paramount, given the competition for 3D screens right now — "Dragon" is on pace to finish the three-day weekend period with just under $40 million.

The film was directed by the "Lilo & Stich" duo of Dean DeBlois and Chris Sanders at a production budget of around $165 million. Foreign receipts for "Dragon" already total $8.4 million without key territories including Germany, Australia and the U.K. tallied yet.

Amid an overall domestic box office that was off 17 percent from the same March weekend last year, when Paramount/DreamWorks opened the 3D "Monsters vs. Aliens" to $59.4 million, Disney’s 3D "Alice in Wonderland" finished in second place with $16.4 million.

The film’s week-to-week decline (52 percent) matched exactly its drop in exhibition, with "Dragon’s" entry into the marketplace leaving it playing in around 1,450 3D-equipped locations. 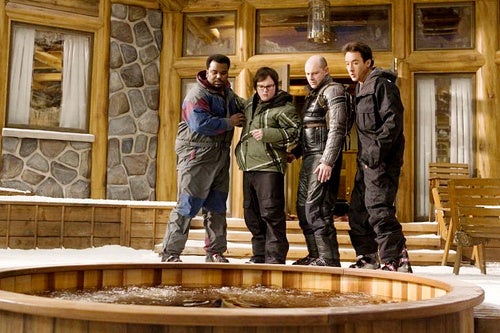 The weekend’s other wide opening, MGM ensemble comedy "Hot Tub Time Machine," finished third Friday with $4.9 million. The $35 million R-rated film is on pace to finish the weekend with over $12 million.

MGM is marketing the film as a kind of 2D alternative, hoping to capture a segment of moviegoing consumers who don’t want to pay the fast-increasing ticket prices for 3D engagements.

The film is matching its tracking, a fact that doesn’t render the opening for a John Cusack film that had a lot of pre-release buzz any less disappointing for MGM officials.

In fourth place, Sony romantic comedy "The Bounty Hunter" grossed $4.1 million on its second Friday. The $40 million film, which pairs Gerard Butler with Jennifer Aniston, should about match its production budget in domestic gross by the end of the weekend.

Indeed, 3D screens are in acutely short supply right now, with four 3D films (if you still count "Avatar") scheduled to be in the marketplace next weekend, when Warner opens "Clash of the Titans."

Having secured commitments from exhibitors for two weeks or more of 3D play, Paramount is secure, for now, in its booking for "Dragon." However, Disney — which has enjoyed long legs for "Alice" — will once again face a tough fight, as it and Warner compete for the limited number of 3D screens not showing "Dragon."

Emerging from what had to be the most competitive booking cycle yet for a 3D movie, Paramount and DreamWorks are breathing fire, securing 2,178 3D theaters for the animated PG film “How to Train Your Dragon.”

That 3D theater count, which includes about 188 in IMAX, is only about 70 venues shy of what Disney’s “Alice in Wonderland” opened with three weekends ago, when it grossed $116.1 million.

Reviews for "Dragon," which was directed by the “Lilo & Stich” duo of Dean DeBlois and Chris Sanders, have been solid, registering a 94 percent fresh score on critics aggregator Rotten Tomatoes.

But tracking isn’t outstanding. The film — which comes with a production budget of around $165 million — is projected to gross in the $40 million-$45 million range in its first three days.

By comparison, DreamWorks Animation’s “Monsters vs. Aliens” – released by Paramount on the same March weekend one year ago – opened to $59.3 million.

But with “Alice” still going strong, and Warner Bros. putting a 3D-converted “Clash of the Titans” on the April 2 calendar virtually at the last minute, the outlook could have been worse.

“The way that we’re covered is very comparable to what ‘Alice’ got in a far (less competitive) field three weeks ago,” noted Paramount’s general manager of domestic distribution, Don Harris. “And none of these engagements are one-week locations. Everything is two weeks or better.”

With Paramount able to secure a nearly full compliment of 3D screens for “Dragon” for at least two weeks out, the pressure is on both Disney and Warner next weekend for "Alice" and "Titans."

“The real question is how much everybody gets beat up next week,” said Disney theatrical distribution chief Chuck Viane. “There’s no way that I know of that ‘Titans’ can open in the same number of (3D screens) as ‘Dragon.’ There’s only X number of buildings.

For its part, with “Alice” having grossed $273.3 million in the U.S. and Canada to date, and another $300 million abroad, Disney was able to retain around 1,450 3D screens for the film going into its fourth weekend of release.

To an extent, this displays the rapid deployment of 3D screens currently occurring in the exhibition market. When “Alice” opened at around 2,250 3D locations on March 5, “Avatar” — the only 3D holdover in the market — saw its deployment drop to only 661 3D screens.

Viane noted that several exhibitors signed on to run “Alice” were still installing digital 3D equipment as of Thursday night and are hoping to acquire the necessary city-government approvals needed to open those screens this weekend.

While Disney has confined itself to only the digital 3D universe, Warner will be able to play “Titans” in theaters which have signed onto Technicolor’s conversion system, a relatively low-cost “bridge” solution that adds 3D capabilities to standard 35mm film projectors.

Regardless of how the competition for screens shakes out, a report just issued by Wall Street analyst Richard Greenfield revealed that ticket prices have increased markedly of late for 3D engagements.

With that in mind, one MGM official noted that the studio is “playing up the fact that ‘Hot Tub Time Machine’ is a 2D film,” in an effort to convince price-conscious movie-goers that there is a lower-cost alternative. “We’re pushing this as the No. 1 2D movie in America,” the official said.