Matthew Vaughn’s much-anticipated R-rated comic-book adaptation "Kick-Ass" got off to a soft start at 3,065 locations in the U.S. and Canada Friday, taking in $7.5 million.

The Lionsgate-distributed film, pegged to gross around $25 million its first weekend in theaters, might not even clear $20 million by the time the three-day accounting period is finished.

Amid an overall box office that’s pacing about 5 percent above the $103.8 million grossed on the same weekend last year, Sony’s star-laden "Death at a Funeral" opened in second place with $5.6 million, which puts it on track to meet the low side of its pre-release projections.

In third place in its second weekend of release, Fox’s "Date Night" grossed $5.5 million, with the Shawn Levy-directed romantic comedy, which stars Tina Fey and Steve Carell, dropping only 40 percent week to week.

DreamWorks Animation’s "How to Train Your Dragon" also continues to display legs in fourth place, grossing $4.4 million Friday. Dropping only 38 percent from its third weekend in release, the 3D film will pass the $150 million domestic mark this weekend.

In fifth place, Warner’s "Clash of the Titans" dropped 48 percent in its third weekend to $4.3 million — downright respectable playability for a converted 3D film that, according to DreamWorks head Jeffrey Katzenberg, looks so bad, it’s going to turn the world against 3D. The Sam Worthington movie could pass the $130 million mark in North America on Sunday.

Friday’s big story, however, remained "Kick-Ass," which Vaughn shot independently for $28 million, and Lionsgate acquired for a price in the mid teens after a bidding war. (Previously, that purchase price had been erroneoulsy reported to be $25 million here at TheWrap and by numerous other outlets.)

A presentation of the film at Comic Con last summer generated momentum that only picked up with Harry Knowles and myriad other fan-site operators lauding the film.

It came late, but there was also the predictable controversy — predictable in the sense that Chloe Moretz plays a 10-year-old girl who cusses a lot while she enthusiastically kills people — with high-profile critic Roger Ebert’s evisceration of the movie stirring up even more last-minute attention.

But despite ample buzz, a promotional spend that was on the high side for Lionsgate, and decent reviews (77 percent fresh on Rotten Tomomatoes), "Kick-Ass" — although assured of making money — will have to display some real playability in order to surpass moderate-success status.

Lionsgate officials note that, although the film didn’t open huge in the U.K., its drops have been minimal since its Easter Weekend premiere for Universal in that territory.

Also set to make money after a modest debut, "Death at a Funeral" was fully financed by Screen Gems at a cost of $21 million.

After an early spring dominated by 3D, the first sure sign of summer has arrived.

With another three weeks before "Iron Man, the superheroes are back, this time in the form of Lionsgate’s highly anticipated comic-adaptation “Kick-Ass.”

Featuring up-and-comer Chloe Moretz as the 10-year-old, foul-mouthed assassin Hit Girl, and directed and independently produced by Matthew Vaughn at a cost of $28 million, the decidedly R-rated “Kick-Ass” will open in 3,065 theaters in the U.S. and Canada Friday. 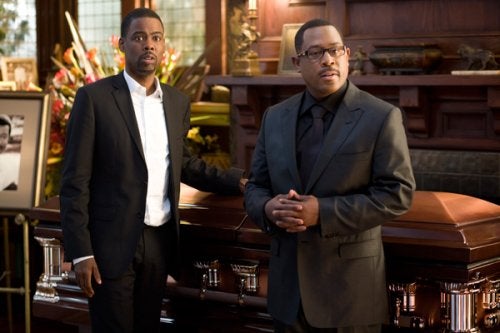 “But we think the playability of the film is going to be there,” said Lionsgate distribution head David Spitz, whose studio won a bidding war last year to acquire domestic distribution rights to “Kick-Ass.”

Confidence in the film’s legs stem from its performance in the U.K., where it dropped only 33 percent last weekend to $1.8 million, after a disappointing start two weeks ago going against “Clash of the Titans.” (Universal is distributing the film abroad.)

Lionsgate officials have had trouble finding comparable models for the blood-splattered, offbeat film, but they’re hoping the performance is somewhere in the range of 2009 R-rated Sony hits “Zombieland” (opened to $24.7 million) and “District 9” ($37.4 million).

Despite the film’s subject matter — which features the young Moretz dismembering dozens of gangters and getting shot herself at point-blank range (in Kevlar, of course) — dissonance and protests aimed at the film has so-far been rather muted … although film critic Roger Ebert gave it a scant one and a half stars, based on its violence.

Meanwhile, opening in 2,459 North American theaters, “Death at a Funeral” is tracking to yield a first-weekend gross in the high-teens, which would make it the biggest opening yet for director Neil LaBute (“Nurse Betty,” “Lakeview Terrace”).

Fully financed by Screen Gems at a cost of $21 million, it stars Chris Rock, Tracy Morgan, Martin Lawrence and Zoe Saldana. Writer Dean Craig adapted himself the screenplay that was used for the eponymous 2007 U.K. film, which as also produced by Sidney Kimmel.

Reviews-wise, Rotten Tomatoes is scoring the movie in the 42 percent fresh range.

In terms of new limited releases this weekend, the market presents plenty of options, with Roadside Attractions opening “The Jonses,” starring Demi Moore and David Duchovny in 192 locations.

Other indie releases include Steve Buscemi film “Handsome Harry” from Paladin and Anthony Hopkins/Laura Linney thriller “The City of Your Final Destination” from Screen Media.

As for holdovDreamWorks Animation’s “How to Train Your Dragon” looks best poised to challenge for the third-place position, with the 3D film dropping only 14 percent last weekend — its third in release — to $24.9 million.

“Date Night,” which debuted to $25.2 million last weekend, and “Clash of the Titans,” which led the domestic market for the second straight weekend with $26.3 million, are both expected to drop 50 percent or more.