Perhaps as a subgenre, the well-worn police buddy comedy is just getting a little too old for this.

Warner Bros.’ "Cop Out" debuted Friday to $6 million at the domestic box office, good enough to match midling pre-release estimates but not big enough to surpass a dark R-rated Martin Scorsese movie that had already been in theaters for a week.

Amid a lackluster overall box office, impacted by yet another round of crippling East Coast storms and essentially flat with the low-tide $105 million taken in on the same weekend last year, Scorsese’s nut-house-themed "Shutter Island" again finished on top, declining a respectable 53 percent from its premiere a week earlier while grossing $6.7 million Friday, according to studio estimates.

The film, which stars Leonardo DiCaprio, is on pace to finish the weekend with over $22 million. If it sticks to that pace, it would also match its $75 million production budget in cumulative domestic gross.

As for the Kevin Smith-directed "Cop Out," which pairs Bruce Willis with Tracy Morgan in what critics feel is a rather by-the-numbers bicker-fest, it’s tracking to finish the weekend with nearly $17 million in domestic gross, right around where Warner thought the film would come in. The movie was shot with a modest budget somewhere in the $30 million range, according to studio officials.

Finishing in third place Friday was Overture’s George A. Romero horror remake "The Crazies," which grossed $5.9 million at 2,476 locations. Starring Timothy Olyphant as — you guessed it — a small-town sheriff, dealing with a citizenry infected by a "28 Days Later" type flu (treatment: take two pitchforks and call me in the morning), the well-reviewed movie is on pace to surpass $15 milion for the weekend, which would be on the high end of its pre-release expectations.

In fourth place on its final Friday before it has to give most of its 3D screens over to Disney’s "Alice in Wonderland," Fox’s "Avatar" took in another $3.1 million. It’s pacing to finish the weekend with another $13 million or so, which would push its record domestic gross passed the $700 million mark.

Here’s a look at the top 10 at Friday’s North American box office:

The dudes carry the news when it comes to box-office success this weekend.

The three R-rated films projected to finish atop the domestic market this weekend are all significantly reliant on the young-male demo — with Paramount holdover “Shutter Island” expected to narrowly beat newbies “Cop Out” from Warner Bros. and “The Crazies” from Overture. 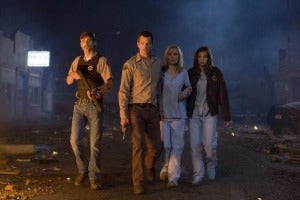 Fully financed by Warner on a production budget of just over $30 million, and starring Bruce Willis alongside Tracy Morgan, Warner is hoping to open “Cop Out” – which Smith wanted to call “Couple of Dicks” before the marketing department stopped him – to an opening gross of somewhere in the mid-to-high teens.

“It think we’re all concerned about the weather reports on the East Coast going into the weekend,” said Fellman, noting that the potential for a latest round of crippling storms could impact moviegoing this weekend.

Of course, coming in with mostly unfavorable reviews – evidenced by an 11 percent fresh score on aggregation site Rotten Tomatoes – “Cop Out” would seem to have other clouds on the horizon.

Conversely, Overture’s remake of a 1973 George A. Romero film, “The Crazies,” is enjoying solid critical marks (an impressive 90 percent fresh).

Co-produced by Overture with Participant Media on a production budget of just under $20 million, and opening in over 2,400 locations, the film casts star Timothy Olyphant in his comfort zone, with the former “Deadwood” and upcoming “Justified” star playing a small-town sheriff trying to keep legions of homicidal Red State zombies at bay.

Overture officials think the film will gross in the low-to-mid teens its first weekend out.

“That seems reasonable based on some of the horror movies that have played over the last few months,” said Overture distribution chief Kyle Davies, noting the opening-weekend performances of Sony’s “30 Days of Night” ($15.9 million) and Lionsgate’s “Daybreakers” ($15.1 million). “We’re getting a good reaction, and the movie legitimately scares people. It’s tracking well with younger males.”

Accounting for a standard 50 percent week-to-week drop, the Martin Scorsese film — with Leonardo DiCaprio as a federal marshal investigating a creepy insane asylum — would gross more than $20 million and lead the overall box office in week two.

“They’re well-placed to be No. 1,” conceded one rival-studio distribution official.

Notably, this will be the final weekend for Fox’s “Avatar” will command the bulk of North American 3D screens, Disney’s Tim Burton-directed “Alice in Wonderland” is set to debut next weekend.

At $691.7 million in domestic gross through Wednesday, according to BoxOffice Mojo, the James Cameron blockbuster should easily surpass the $700 million mark this weekend.