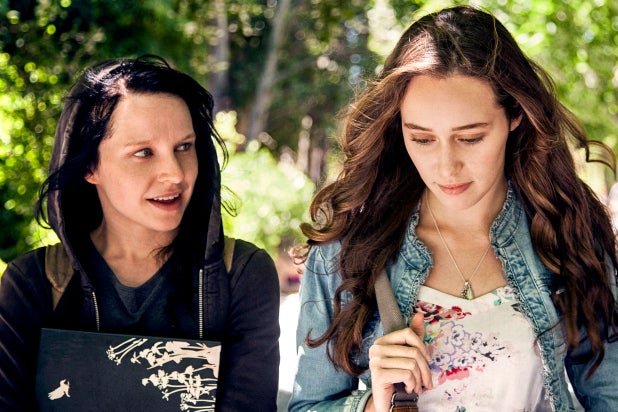 The silly but effective “Unfriended,” that 2014 thriller about a vengeful ghost killing off her high school tormentors one by one in a Skype chat room, was no classic, but it’s looking more like one when compared to “Friend Request,” an utterly idiotic movie that uses social media as a conduit for witchcraft and mayhem.

If nothing else, this supposed horror movie ranks among the most unintentionally funny films of late, starting with the periodic on-screen appearance of the heroine’s Facebook friend count as it spirals downward, which is presented as equivalent to the tragedy of a string of murders.

Maybe it’s a language thing: Director Simon Verhoeven (son of “The Nasty Girl” director Michael Verhoeven and actress Senta Berger) is making his first feature in English, and perhaps that would explain why even the film’s intended comic relief (two bumbling detectives who are in thoroughly over their heads as the body count climbs) are mishandled so badly that even the scenes that are supposed to be funny only generate laughs because they’re so very not-funny.

Also Read: Alycia Debnam-Carey on Fans, 'Fear The Walking Dead' and Leaving Behind 'The 100'

We’ll never know if it was Verhoeven or his co-writers Matthew Ballen and Philip Koch who came up with the kooky cops, or the scene where a death is declared a suicide even though there’s no body, or the campus memorial where two close friends are eulogized alongside a weirdo outsider just because they all happened to die on the same week. This is a movie that relies on Facebook as its motor, but the script must have been full of 404-Page Not Founds.

That weirdo outsider is Marina (Liesl Ahlers), a black-hoodie-clad loner at a California university where Laura (Alycia Debnam-Carey, “Fear the Walking Dead”) is a popular sophomore with a tight circle of friends and a hunky med-student boyfriend, Tyler (William Moseley, “The Royals”). Marina is in Laura’s psych class and has — gasp! — no Facebook friends, possibly because all she posts are creepy black-and-white drawings and animations involving spiky forests and evil mirrors. (If only she’d attended a college where even one other girl was taking fashion cues from Gollum and Marilyn Manson.)

Laura friends Marina on Facebook, and has a conversation with her after class, which turns Marina into Single Goth Female, constantly pestering Laura online with messages and video chats. When Laura blows off Marina on her birthday to go have dinner with Tyler and her pals, Marina kills herself.

(Or does she? Again, there’s a suicide video, but no body, although no authority figure in the film seems to think this merits further investigation.)

Also Read: 'It' Passes 'The Exorcist' to Become Highest Grossing Horror Movie Ever

Marina — or her ectoplasm, or whatever — messages Laura, telling her she will know what it’s like to be alone, before killing off Laura’s pals and then posting gruesome videos of their deaths to Laura’s Facebook page, hence leading to her online friend attrition. Those videos can’t be deleted, and neither can Laura’s account (so Marina is either a powerful witch or a Russian bot) and it’s just all so tragic, except for the fact that Laura’s friends were all barely sketched-in to begin with (the sassmouth, the party dude, etc.) and the “kills,” as horror buffs like to call them, aren’t all that scary. (This is a very PG-13 kind of R-rated thriller.)

By the time “Friend Request” whips around to what it thinks is a shocker ending, you’ll already be thinking about where you parked and whether or not you want to refill your soda cup before leaving. Even die-hard opponents of smartphone usage in a movie theater will probably forgive anyone who would rather check Facebook than watch what’s happening on the screen.