“Couples Retreat” doesn’t hit theaters until Friday, and it hasn’t had any festival exposure to speak of. But the Vince Vaughn comedy already has more than 13,000 “fans” on Facebook grabbing production stills and video clips provided by Universal.

Better still, it’s got the fans taking all that stuff back to their own pages to share with their friends.
With the youthful, moviegoing audience watching less TV than ever, studio marketers have begun to aggressively mine what has quickly become their preferred media platform – the web. 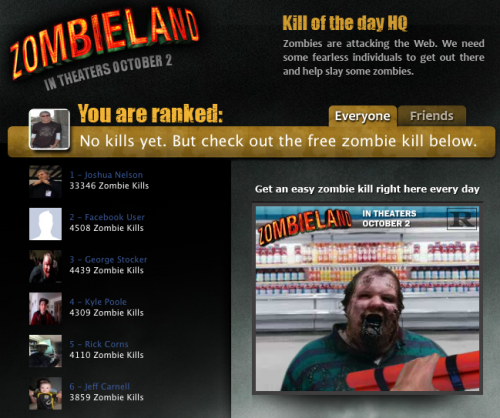 These days pretty much every major release now has promotional ties to Facebook, MySpace, Twitter or the other online watering holes where movie-watchers congregate. (The marketers' preferred social network? Find out here.)
“This is a huge part of our marketing now … creating an account and building a fan base -- and a lot of what we’re able to do is free,” said Nicole Butte, VP of new media for Focus Features, who recently oversaw a social networking campaign for the Tim Burton-produced animated film “9.”
Huge is right.
Paramount's "Transformers: Revenge of the Fallen" Facebook page has more than 1 million fans, who will receive notifications of the title's Oct. 20 DVD and Blu-ray release.
Last weekend's box-office champ, "Zombieland," has more than 250,000 fans -- 10,000 of which have signed up to play a Java-based game that lets them "kill zombies all over the Internet" with objects including banjos. As with most movie game apps, those who sign up to play not only agree to share profile data, they also post a promotion for th 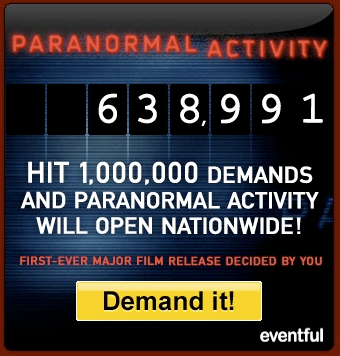 e film on their own Facebook wall every time they visit a Sony-sponsored site that supports the online game.
Meanwhile, for its micro-budgeted horror film "Paranormal Activity," Paramount hired San Diego-based boutique marketing firm Eventful to, among other things, create a social media campaign built around driving users to the film's site so that they can "demand" that the movie open wide. As of Thursday, "Paranormal" was one of Twitter's top 10 "trending topics."
As for “9,” an aggressive Facebook campaign allowed the studio to frame the movie’s mysterious subject matter and characters for a core group of film enthusiasts. Even better, the smaller group virally disseminated the information they’d gathered to a broader audience – long before expensive TV ads began to run.
Indeed, the intersection between social media and the movie business became apparent this summer, when Universal’s “Bruno” got off to a hot Friday-night start. Unfortunately, that film also highlighted the downside of the new alliance when it cratered precipitously the following day and never recovered -- the victim of same unfavorable, real-time tweeting.
Studio marketers at the time gave birth to a new phrase, the “Twitter Effect,” to explain how dissatisfied moviegoers armed with smart phones and social networks were torpedoing films even before they left the theater.
According to information released last week by former New Line interactive marketing guru Gordon Paddison, who is now an industry consultant, 73 percent of 4,000 moviegoers in a recent study have established profiles on social media networks. The study was underwrittten Google, AOL, Microsoft, Fandango, Facebook, Yahoo and MovieTIckets.com.
“This is just where the audience is now,” said David Singh, executive VP of creative content for Disney of the use of social networks by studio marketers. “Something like 70-80 percent of frequent movie-goers under 25 visit Facebook eight or nine times a day.”
Singh said Disney started experimenting with MySpace for the launch of dance film “Step Up” back in the summer of 2006, a time when the News Corp.-owned property was still the dominant social media platform.
In the spring of 2008, he said the studio became enthralled with Facebook, which, despite the growth in popularity of Twitter, remains the social media network of choice for movie marketers, based mainly on its robust content-sharing features.
At that time, Disney bought out Facebook’s gift store and filled it with plush toys from the Pixar hit “Wall-E” -- only to watch the offering become so popular that the site crashed.
Today, pretty much every Disney release has a robust Facebook marketing component, with the studio’s interactive marketing team spending what Singh estimates to be about 40 percent of its time and resources on social media endeavors.
In June, for example, before romantic comedy “The Proposal” embarked on a theatrical release that would ultimately net $290.4 million worldwide and counting, Singh’s team posted a “how well do you know me” quiz on the Sandra Bullock film’s Facebook page.
The movie’s 4,000-plus “fans” soon dispersed the quiz all over the network. Ultimately, more than 400,000 took the quiz, clicking through and exposing themselves to all sorts of information about “The Proposal” in the process.
“That’s really the power of social media,” Singh said. “You can build on someone’s natural excitement for something and get them to evangelize on behalf of your film.”
Indeed, the number of fans who actually come to a Facebook page are “just the tip of the iceberg,” Focus marketing president David Brooks told TheWrap. “People share what they found with the world. It’s way more interactive than the usual movie fan page.”
Brooks wouldn’t reveal how much money Focus is spending on social media at this point. “It’s not a lot of money,” he said. “But it’s a significant part of our plan.”
Of course, there is a downside to this bargain marketing, as “Bruno” proved.
Much like the early days of harnessing nuclear power, studios admit that they’re still not always in control of the online forums they establish.
In fact, things can turn bad. Fast.
One studio marketing exec, who spoke to TheWrap on the day prior to a recent major release said he was “fantastically thrilled” with the results of the film’s MySpace and Facebook campaigns.
His viewpoint changed dramatically when the film’s September premiere tanked.
“We hyped the s--- out of it on MySpace and Facebook, and as soon as the movie was made available to the public, that turned on us,” he said. “We saw it happening hour by hour -- people were telling each other on our Facebook page how BAD they thought the movie was.’
“As soon as the product is available in the marketplace,” he said, “the same campaign that you created to let everyone talk about it can kill you.”
Disney’s Singh agreed. “Audiences on these social networks tend to be really savvy,” he said. “They don’t want to be marketed to in the traditional sense. As we’ve seen, positive feedback can spread like crazy, but so can negative feedback.”
x
Looks like you're enjoying reading