Nearly three weeks after the release of “Friends: The Reunion,” James Corden is giving us more — specifically, 11-plus minutes of bonus footage that aired Wednesday night on “The Late Late Show with James Corden.”

In the segment, Corden picks up each of the six main cast members in an extended cab golf cart at different locations on the Warner Bros. studio lot. The raw emotions seen in the HBO Max reunion special are resurfaced even in the golf-cart ride.

“I’m really trying to sort of keep it together and be cool about this,” Corden says as he sits down with the cast on the coffee shop set. “But I am overwhelmed at how incredible it feels to see these sets up. And I’ve never been here before. So I can’t begin to think how you’ll all be feeling back here, spending time.”

But there are also funny bits, like when Corden asks if the actors had favorite seats on the particular sets. Most agreed the armchair at the far end of the coffee shop set was particularly comfortable. But Lisa Kudrow declared David Schwimmer was actually sitting in his favorite spot — on the awkward arm of the famous couch. “Yeah, I’m so comfortable right now,” he says, with a look reflecting anything but comfort.

Corden also tours the various rebuilt “Friends” sets and reenacts several memorable moments, including when Rachel ate cheesecake off the hallway floor, the time Monica loudly proclaimed her engagement to Chandler on the balcony and the moment Chandler and Joey realized their recliners were everything they’d hope for — and more. 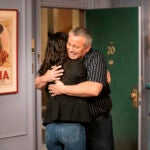 There’s little that’s actually revelatory, until a game Corden leads in which he asks them to “point to the friend who you think is the answer.”

When he asks who broke character and who laughed most while filming, the quick consensus is Lisa Kudrow, before Matt LeBlanc interjects.

“Hold on,” LeBlanc says. “I would have to say that’s a toss-up between Lisa and Jennifer.”

“You laughed a lot — this?” LeBlanc replies, placing his hands together over his mouth. “Watch ‘Friends.’ Whenever you watch the show, Rachel does this a lot. That’s Jennifer hiding her laugh. Just so everybody knows.”

Watch the entire clip from “The Late Late Show with James Corden” here and above.