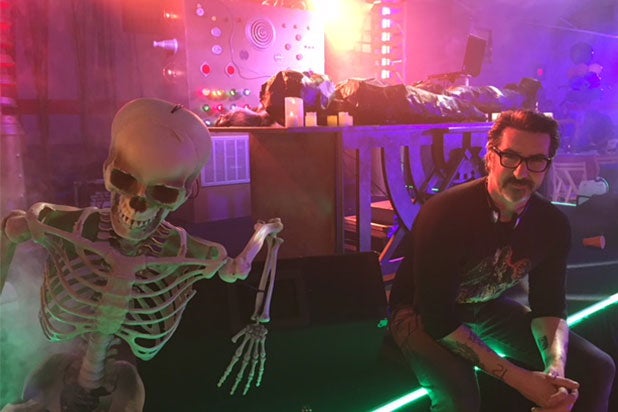 Years before he produced “Halloween,” this year’s biggest horror hit, Ryan Turek was nowhere close to developing films: He was commenting on horror blogs’ message boards.

Turek moved to Los Angeles in 1999 with dreams of becoming a screenwriter. He never imagined masterminding a “Halloween” film that has grossed $76 million its opening weekend, breaking records in the process.

It’s a story of the unconventional way Blumhouse does business — and harnessing the power and passion of fandom into box-office dominance. The company hired Turek based on his passion, obsession and expertise on the horror genre, and proved they’d rather listen to a true fan than an executive who might not know horror.

“I did not think I would ever get the job,” Turek told TheWrap. “I wasn’t thinking about the experience of being a journalist and meeting so many people made me valuable — but it did. I never saw myself as an executive and just didn’t think I had that experience. I was shaking, like, oh my god, this is finally the thing that I had been looking to do. It was a 14-year journey from the time I moved out here to where I am now.”

When he first moved to L.A. from New York City (where he went to film school after growing up in Connecticut), Turek started writing occasional spec scripts and got a transcription gig when he could. But he wanted people to see his writing faster.

The early 2000s were a boom time for online film journalism, and he started writing reviews on message boards on Creature-Corner.com. The site’s editor reached out to him to be a reporter for the site, and he quickly joined the world of film junkets, interviewing the legends he had looked up for so many years. Among them: Wes Craven and “Halloween” creator John Carpenter.

He began writing under the name Ryan Rotten. “It was easier for me to write reviews under that name after I snuck into test screenings,” he said with a giggle.

Soon, he was approached to cofound DreadCentral.com and later, ShockTillYouDrop.com, where he served as the managing editor for seven years. That’s when he met Jason Blum, who in 2000 founded Blumhouse, the production company that would eventually produce hits like “The Purge” films and “Get Out.”

Turek said he first met Blum to interview him for an article. But he soon put his tape recorder down, and found himself just talking movies with a fellow fan.

A couple years later, Universal asked Turek whether he would want to tour the country with Blum to promote “The Purge.”

“I looked at Blumhouse with a little bit of jealousy because I really wanted to work there,” Turek added, laughing.

He said that by this time, he had “grown out” of wanting to write, and had instead decided he wanted to produce films.

Blum’s assistant at the time, Chelsea Peters, wanted to produce a little slasher film herself, and asked if he wanted to get involved. It never took off, but when a development executive position opened at the company, she contacted him. (Peters is now making her own films, including “All That We Destroy” for Blumhouse).

“What I recognized in him was just a love of horror over anything else, and just incredible knowledge about it and incredible reverence for it,” Blum told TheWrap. “I definitely believe that fantastic producing is driven by passion, not by money. His knowledge and his love of the genre was infectious and deep. The biggest reason I love horror is the horror community and the fans, and I was really attracted to the idea of finding someone who could connect us to the vein of the community — and that’s what Ryan did from the day he started.”

Turek’s producing credits include “Truth or Dare,” ‘Happy Death Day,” “Unfriended: Dark Web” and the upcoming “Happy Death Day 2U.” But he said “Halloween” is his passion project, and has been in the making for over four years.

Also Read: 'Halloween' Posts Biggest Opening Weekend for a Film With a 55+ Woman as Lead

“It exceeded all of my expectations,” said Blum.

Turek first saw a “Halloween” opportunity when Dimension Films lost the production rights to another “Halloween” film, and the rights reverted back to Bob and Harvey Weinstein’s Miramax.

“When I was growing up, ‘Halloween’ meant the world to me,” Turek said. “There was always that level of fandom for the ‘Halloween’ franchise… and I wanted to make a slasher movie that didn’t have that ‘wink, wink, come and seek’ nature that the ‘Scream’ franchise has.”

He checked with Miramax by email about whether a “Halloween” film was in progress. Flash forward a couple weeks: Blum asked Turek to join a meeting to discuss what would become the sequel to John Carpenter’s 1978 “Halloween.”

“That was the most stressful meeting I’ve ever had in my life,” Turek recalled. “It’s really surreal, and I’m still kind of pinching myself because since I sent that email three years ago, it’s been part of my every waking thought, hoping that this movie got off the ground. Then it all worked out.”

“He was from the first minute a passionate believer,” Blum said. “He was the first person all in on this project and that was critical, and equally critical in the creative process because he kept us all in check. Ryan was a great person to say, ‘hey, you should think of the ramifications of this or the ramifications of that when you do this.’ He was vital in the process not only in the deciding but also in the producing.”

“He won her trust in a profound way, which is complicated when you’re producing a movie,” Blum said. “The actors and the production team aren’t always aligned, and he did a great job. He was on set every day, he got his hands dirty, he made the movie happen.”