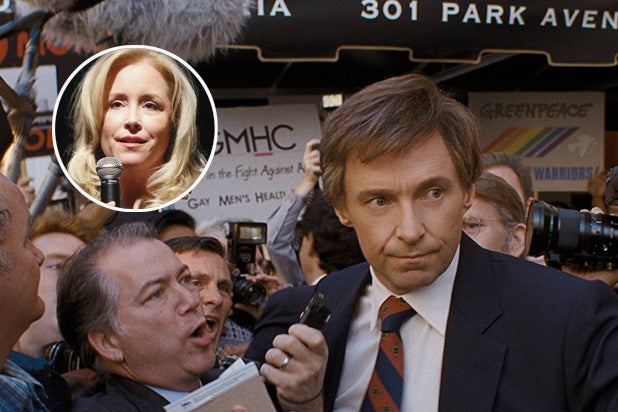 Jason Reitman’s new movie “The Front Runner” explores the rapid unraveling of Sen. Gary Hart, who was coasting toward the Democratic nomination for president in 1988 when a scandal surrounding his relationship with a much-younger woman named Donna Rice created a political firestorm that forced him to withdraw from the race.

In the film, Rice (played by “Darcy’s Wild Life” star Sara Paxton) is depicted as a blonde whose intelligence matches her good looks, one who tells J.K. Simmons’ older campaign fixer at one point, “I did all the things you’re supposed to do so no one would look at me the way you’re doing right now.”

According to Matt Bai’s book “All the Truth Is Out: The Week Politics Went Tabloid,” on which the film is based, Donna Rice really was a Phi Beta Kappa graduate of the University of South Carolina — where she majored in biology and minored in business.

When she met Hart (played by Hugh Jackman in the film), she was living in Miami and working as a sales rep for Wyeth Pharmaceuticals — where she became “her district’s top saleswoman,” Bai wrote in the book.

However, the film downplays the fact that she was also an aspiring actress and model — and former Miss South Carolina World pageant winner — who had landed small parts on TV shows such as “Miami Vice,” “Dallas” and “One Life to Live,” according to the Washington Post.

The film suggests that the 50-year-old Hart met the 29-year-old Rice in March 1988 on a one-day cruise from Miami to Bimini aboard a yacht with the much-lampooned name Monkey Business. But in fact, Bai wrote that the two had met three months earlier in Hart’s native Colorado — at a New Year’s Eve party at the Aspen home of her one-time fling, the rocker Don Henley.

Rice, who married businessman Jack Hughes in 1994, has consistently sidestepped whether her relationship with Hart was ever sexual. “I don’t want to answer you,” she told “20/20” in 1988. “The reason is because it’s a question of dignity. Whether I did, whether I didn’t with Gary Hart or anybody else, I wouldn’t answer it one way or the other.”

Following the scandal, Rice Hughes became an advocate for children’s safety on the internet, and has been president and CEO of the nonprofit advocacy group Enough Is Enough since 2002.