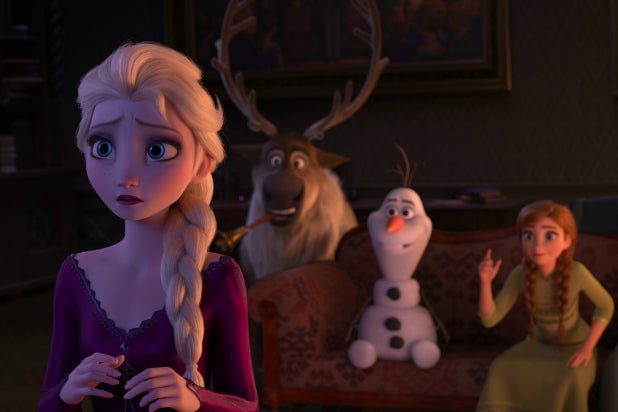 Stephen Sondheim’s “Into the Woods” was predicated on the idea that fairy tales have a lot more going on even after “Happily ever after,” but “Frozen II” doesn’t quite manage to expand on that idea.

There’s a lot to like here, from a rich palette of autumn colors to a potentially provocative subplot that will teach children that nations need to acknowledge and atone for their historical sins, but in the final tally, this is a sequel that exists not because there was more story to be told but because there was more money to be made.

As such, there’s a certain level of calculation going on here — one imagines a pair of Post-It notes that just said, “Idina Menzel Belts Here” — but there’s also enough craft and care to keep “Frozen II” from coming off as an utterly shameless cash grab.

We return to the now-happy kingdom of Arendelle, ruled over once again by the ice-wielding Queen Elsa (voiced by Menzel) and her mortal sister Princess Anna (Kristen Bell), who enjoy the company of enchanted snowman Olaf (Josh Gad), woodsman Kristoff (Jonathan Groff) and his devoted reindeer Sven. They sing a song called “Some Things Never Change,” which is a good indication that everything is about to.

The elements themselves seem to be attacking the kingdom, sending our protagonists off on a quest to Northuldra, a land that has been cloaked in mists ever since Elsa and Anna’s grandfather King Runeard (Jeremy Sisto) traveled there to christen a dam that was a gift from the Arendellians. With their memories of a legend and a lullaby shared with them by their parents (Evan Rachel Wood and Alfred Molina), the sisters will push themselves to the very edge of self-sacrifice to correct a historical wrong and bring harmony back to the world.

Also Read: Why Elsa and Anna Get to Wear Pants in 'Frozen 2'

And if this all sounds a little heavy — critic Matt Singer jokingly tweeted that “Frozen II” is “an animated musical version of ‘Annihilation’ for the whole family to enjoy” — there are plenty of Olaf shenanigans, not to mention Kristoff’s bumbling attempts to ask Anna for her hand in marriage. On their travels, he even meets another woodsman, voiced by Jason Ritter, who shares Kristoff’s habit of talking to the reindeer and voicing both halves of the conversation.

Returning directors Jennifer Lee (who also wrote the screenplay) and Chris Buck set the film in autumn, offering a completely different color scheme than the icy-blue hues of the first “Frozen”; the rich results almost justify an eventual third and fourth chapters just to see what the animators can do with spring and summer. The decision to move the action away from Arendelle also provides the opportunity to add to the dramatis personae; in addition to the actors mentioned above, the cast also includes Martha Plimpton and Sterling K. Brown as, respectively, the leader of the Northuldrans and a dedicated soldier of Arendelle. (The Norwegian singer known as AURORA provides the otherworldly voice that calls out to Elsa, thus kicking off the plot.)

Also Read: 'Frozen II' on Track for $100 Million-Plus Opening, Biggest for Animated Film Outside of Summer

To its credit, “Frozen II” acknowledges that it has huge snowshoes to fill. There are various moments of self-aware humor, from Olaf’s breathless recap of the first movie to an incredulous audience to Elsa acknowledging that she, too, is sick of “Let It Go.” And arguably the best number this time around is Kristoff’s plaintive power ballad “Lost in the Woods,” the cheesiness of which Lee and Buck accentuate by shooting it along the lines of Bonnie Tyler’s “Total Eclipse of the Heart” video.

The implications of Arendelle’s past sins coming back to haunt the kingdom could also certainly lead parents to interesting conversations with their children about history, politics and crimes committed by those in power. (If the next film in the series includes a Truth and Reconciliation Commission, I’m all in.) And it’s great to see Anna’s character strengths once again being put on equal footing with Elsa’s magical gifts, which will no doubt provide a new spin on the ever-popular childhood debate of the fantasy of becoming Superman vs. the relative reality of becoming Batman.

Beyond that, returning composers Kristen Anderson-Lopez and Robert Lopez seem to be ticking off the boxes of what “Frozen” fans want, from the aforementioned Idina Menzel big-note extravaganzas (“Into the Unknown” and “Show Yourself,” the latter a duet with Wood) to a jokey Josh Gad number (“When I Am Older”). There’s nothing wrong with these songs, per se, but the effort to replicate their previous success weighs down any possibility of letting them shine on their own.

But if you’ve been pining for more “Frozen” — or are the parent of someone who is — “Frozen II” has been specifically designed to fulfill that wish. It’s just too bad that the creative team behind a mega-hit that wasn’t based on existing intellectual property (save a Hans Christian Andersen tale upon which the first movie was very loosely based) couldn’t apply their time and talent to a project that wasn’t a sequel.