“Fuller House” premiered last Friday to terrible reviews from critics, but with Season 2 already announced, it’s obvious Netflix and its subscribers couldn’t care less about the opinions of cynical adults who get paid to complain. And after watching a number of the episodes alongside my girlfriend, I think those critics are deeply out of touch with what made “Full House” a hit in the first place.

“The first four minutes of ‘Fuller House’ are four of the most excruciating TV minutes ever broadcast; shrill, garish, unfunny, and further poisoned by the live audience’s baffling apparent appetite to hear the catchphrases of the show repeated now, in modernity,” Vulture‘s Margaret Lyons wrote.

Everyone is entitled to an opinion, so hate away if you want, but critics who were so quick to despise the sequel series seem to have forgotten that the original series was so successful because of repetition. If audiences weren’t giggling at an adorable “how rude,” or “you got it, dude” time after time, they were laughing at Danny Tanner’s never-ending desire for a clean home. Or Uncle Jesse’s obsession with his hair. Or Uncle Joey’s impersonation of Popeye the Sailor Man.

Creator Jeff Franklin and his team managed to create eight seasons’ worth of episodes based entirely on one-dimensional characters. They each had their own thing, and ABC milked those things for all they were worth. And then Netflix realized there were still plenty of laughs left to squeeze from the udders of a bygone TV era.

My first clue that “Fuller House” was working came upon hearing my girlfriend laugh from the next room while binging the first three episodes. So I was curious. (OK, I’ll admit I was going to watch at least one episode regardless of my girlfriend’s reaction.)

For the first few minutes, Lyons’ review seemed spot on: The jokes were extremely cheesy; each Tanner daughter bursting back into their childhood kitchen to a boom of applause was laughable for the wrong reasons; the expositional dialogue explaining what’s new in their lives made me cringe; grown-up D.J. Tanner-Fuller (Oh, “Fuller House,” I just got that) became as unbearably wholesome as her father; and the family’s addiction to group hugs was just as corny as it was two decades ago.

But then it hit me — “Full House” was always corny. I thought it was corny when I watched each episode as a kid, and super corny when I watched each episode again as an adult (after I made the mistake of buying my girlfriend the entire series on DVD for her birthday). Yet, I laughed during every episode of “Full House.” And often. Why? Because the formula works, and it still does if you can embrace the family-friendly comedy “Fuller House” is replicating.

With that said, here are five things I’m not the least bit ashamed to admit I loved about the sequel series: 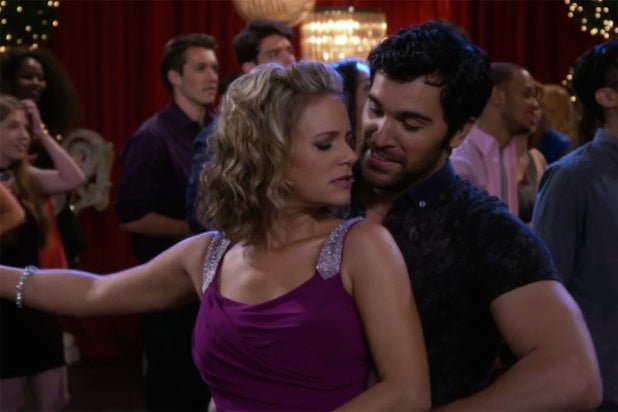 Andrea Barber’s character always provided big laughs, because a group of grown men openly despising a weird, annoying child is hilarious and will always be hilarious.

Although Danny, Jesse and Joey’s disdain for their former neighbor has softened over the years, Gibbler’s weirdness has not. She’s as socially awkward as ever, but now has a child of her own to worry about and is amidst a separation from her equally eccentric husband, Fernando. The fact that Gibbler miraculously managed to find a Latin lover might be unbelievable to some, but it also makes her more relatable to viewers than ever. She’s not just a walking, talking joke. She’s a single mom trying to do what’s best for her daughter, who scores laughs simply by being completely aware of how strange her mother is. Let’s not forget Barber’s last major acting credit is the last season of “Full House,” so her effortless comedic timing is all the more impressive.

2. The New Kids on the Block 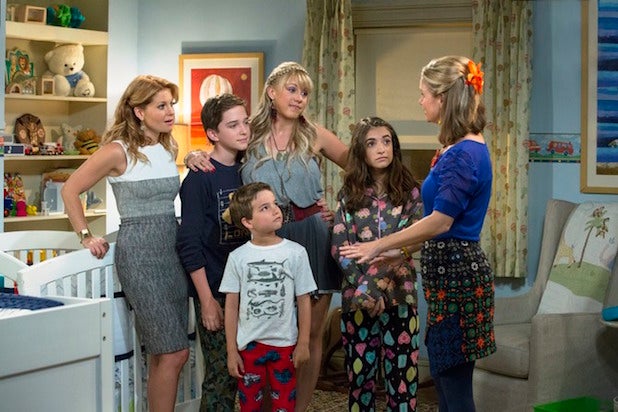 Yes, the ’90s boy band gets referenced several times throughout Season 1 (I haven’t seen all the episodes yet, so I don’t have an accurate count), but I’m talking about the offspring of both D.J. and her bestie, Gibbler. The oldest, Jackson (Michael Campion), is the weakest of the bunch so far, but still serviceable. Gibbler’s daughter Ramona (Soni Bringas) confidently delivers sass that would make Mouth from “The Goonies” proud. And the youngest Tanner-Fuller, Tommy, is a cute baby played by a pair of brothers, which is enough to make any “Full House” fan say, “Aww, they’re played by twins — just like Michelle was!”

Much like middle child Stephanie Tanner was the standout cutie pie when the original series kicked off in 1987, D.J.’s middle son Max (Elias Harger) will win the most hearts — at least until Tommy starts walking and talking. It doesn’t take much for audiences to fall for a cute kid on a sitcom, but Max earns every laugh he gets. 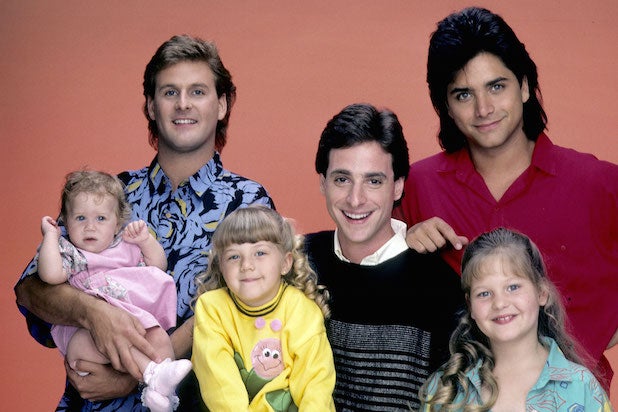 The show may have added an extra syllable to the title, but audiences wouldn’t have cared if it didn’t. “Fuller House” is “Full House.” And it goes to great lengths to remind audiences of that with references to the original sprinkled into each episode in the form of familiar catchphrases, characters’ old habits (Spoiler alert: Danny Tanner’s No. 1 hobby is still cleaning), or Aunt Stephanie passing on life lessons to her nephews that viewers watched her learn as a child.

All of that probably turned off critics, and was maybe too cute for cranky viewers who gave it a shot before streaming something else on Netflix — but it works. The target demographic for the show is people (like my girlfriend) who loved the original, so most viewers are not only in on those jokes, that’s exactly why they’re tuning in. When hanging out with old friends from high school, it’s not uncommon for high school to be the primary topic of discussion. Reminiscing about the past is fun. We do it in our own lives, so it makes sense for characters that grew up before our eyes to do the same. 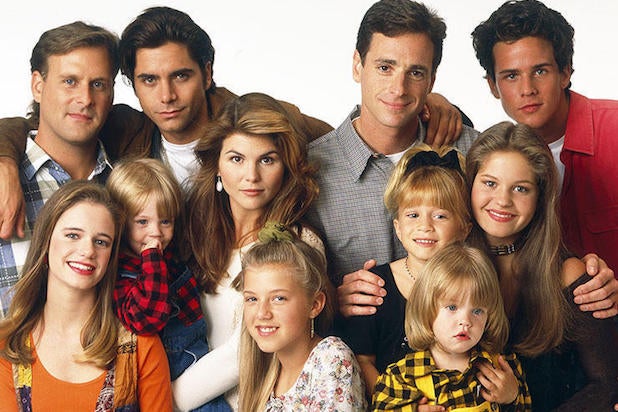 Fans tuning in to watch the entire Tanner-Katsopolis-Gladstone family back together under one roof may be a little disappointed to learn that the former male leads and Aunt Becky are now just guest stars. But hopefully fans will perk up a little upon learning they’re recurring guest stars. After the pilot establishes Danny, Jesse and Becky are moving to Los Angeles, and Joey is busy as a headlining comedian in Las Vegas, each character sporadically returns to their roots. But when they do, it’s a lot of fun and worth continuing the binge to see when they’ll pop up next.

It’s a joy to watch Joey babysit a full house of children he barely knows, heartwarming to see to what lengths Danny will go to ensure his grandkids’ happiness, and laugh-out-loud funny to witness Jesse make dirty jokes (did anyone else catch that oddly risqué semen joke in the pilot?) and give D.J.’s kids dating advice. And by the season finale, viewers will see Aunt Becky’s marriage to her former womanizing husband is as strong as ever.

I’ll say it, this choice is a a little anti-climactic. I bet some of you were hoping I’d single out Steve, or perhaps his competition — D.J.’s new love interest, Matt. I thought about it. Steve’s quirkiness grew on me, even though he put the moves on his former flame way too fast, and Matt should provide some romantic tension throughout the series to keep people guessing who D.J. will end up with. And what about Stephanie? Jodie Sweetin grew up to be a total hottie and was able to seamlessly slip right back into her most famous role with ease.

But the title sequence was a cute and creative homage to the original. With Carly Rae Jepsen’s rendition of a song that’s been stuck in your head for almost 30 years playing over aerial shots of familiar San Francisco landmarks (including the “Full House” house that is now a tourist attraction), it’s the same, but different — which effectively sums up mainstream audiences’ taste in entertainment and why “Fuller House” will become another hit for Netflix, despite mostly bad reviews.

Watch it above, and then rip me apart in the comments section because I said you’re cynical and cranky if you don’t like “Fuller House.” Go ahead, I deserve it.

”Scarface and “House of Cards“ Season 4 are among the movies and shows headed to the small screen, while ”Hitch“ and ”Indecent Proposal“ are on their way out