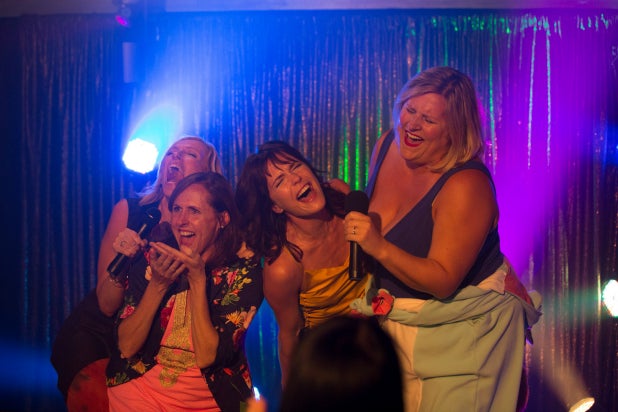 “Fun Mom Dinner” kicks off the way you might expect a comedy with that title would: a montage of four mothers’ school mornings, with each trying with varying degrees of success to wrangle their spawn until one ends up with poo on her face. Such broadness doesn’t bode well for the feature debuts of director Alethea Jones and scripter Julie Rudd.

But although the filmmakers return to outsize wackiness too frequently, the film mercifully isn’t one chaotic gag after another. The titular event is launched when the relatively with-it Jamie (Molly Shannon) invites the new parent at her preschool, Emily (Katie Aselton, “Casual”), to join her and hyperorganized rule-following mother Melanie (Bridget Everett) to dinner that night.

Emily’s down but asks if she can bring her friend and fellow school mom Kate (Toni Collette). After some quick inhales and hesitation, Jamie diplomatically says that Kate doesn’t hang out with other moms. The reason, as the film wisely shows instead of tells, is that Kate is a bit difficult, with a particular rivalry with Melanie, who serves as a “proud parent volunteer” overseeing the school parking lot.

Though Kate refuses, at some point during the day Emily confesses to her that her marriage to Tom (Adam Scott) has gone cold, with him ignoring her subtle flirtations and regarding his watching their kids as a babysitting favor. So she tricks Kate into thinking that she wants to have dinner to talk about her woes. How Kate doesn’t suspect it was the mom gathering all along requires a suspension of disbelief that will come in handy until the credits roll.

The night, unsurprisingly, starts off contentiously, with some name-calling that helps the film earn its R rating. There’s an angry walkout by one party with a just-for-show follow by another, but then a scandalous vape doobie and a call for peace ensues. Soon, all four women are smokin’ in the girls room and embarking on a dine ‘n dash when they set off the restaurant’s sprinkler system. Fueled by booze and weed, the game’s afoot.

Also Read: 'Muriel's Wedding' Is Heading to the Stage in 2017

Rudd doesn’t just focus on the ladies, which relieves the zaniness some. Tom brought his brood over to Kate’s place so that he and Kate’s husband Andrew (Rob Huebel) can babysit together. Andrew seems to have a bit of a greater handle on this parenting gig, and the guys talk about their marriages. (“She has this whole thing about f–ing ‘fun,'” Tom complains while expressing how stressed out and tired he is.) Though, naturally, their night goes off the rails, too; the messup is relatively minor, and these scenes work as a nice palate cleanser to cut the moms’ increasingly frenetic actions.

It also helps that not all the women are eager to go wild. From the beginning, for instance, we see that single mother Jamie isn’t struggling with lack of control over her child as much as loneliness. “You aren’t just a mom,” she says to her phone’s camera. “You are a hot, hot single lady!” (After viewing a snap, she recoils: “Oh God.”)

Jamie then personifies low-key pot paranoia throughout the night. While Kate lets loose and Emily is tempted by good-looking (and/or scuzzy, depending on your perspective) bar owner Luke (Adam Levine), Melanie’s penchant for responsibility doesn’t flag, though the brashness that Everett brings to her character can be overbearing.

The film is also boosted by its ’80s soundtrack, with hits from Pat Benatar, Heart, and the Go-Go’s popping up just when the film is starting to flag and “99 Luftballoons” serving as the inevitable karaoke number. Luke picked it for the ladies, having instantly warmed to them after assuming they were all mothers; though the group is offended, he proves that he meant it as a compliment by showing off his “Moms” tattoo. How having two mothers translates into loving all mothers is a mystery, but Emily’s got to get her flirt on somehow.

By the laws of screwball comedy, “Fun Mom Dinner” must culminate in an overblown crisis capped by a scene of sentimentality. Eyes are opened and walls dropped. It’s predictable, but at least there are some surprise turns in what promised to be a strictly by-the-numbers road.