On the TV series “Glee,” Lea Michele honed an image of being Barbra Lite. There is nothing light about her playing Fanny Brice in the current Broadway revival of “Funny Girl,” which opened last spring and now stars Michele in the title role previously held by Beanie Feldstein. From the moment she enters the stage at the August Wilson Theatre, Michele is a singing diva hard at work. What’s missing is a “girl” who happens to be very “funny.”

Michele’s version of Fanny Brice instead recalls “Funny Lady.” And anyone who knows the career of La Streisand knows that to bring up the 1975 big-screen sequel to the 1968 classic “Funny Girl” is not exactly a compliment. Even Kevin Kline’s Babs-loving character in “In & Out” had to admit the 1975 movie musical in which the star reprised her Oscar-winning role as an older Fanny Brice is dreadful. “She was under contract!” he apologizes to the bride he has just jilted at the altar when he belatedly comes out of the closet on their wedding day. 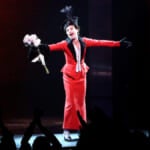 In the show’s problematic second act, Michele’s Fanny wears the Broadway-star mantle perfectly, unaware that maybe her financially beleaguered husband, Nicky Arnstein, has crises other than getting to the theater on time to see her new show. Michele plays the solipsistic star to the tee.

The critics and the public have long thought “Funny Girl” had never received a Broadway revival before 2022 because the 1964 musical needed a star of Streisand’s caliber and talents. The far greater and often unacknowledged problem is that this show is cursed with a terrible second act.

This revival’s second act isn’t great, but it is much improved. Director Michael Mayer and Harvey Fierstein, the credited book doctor on the revival, have jiggered with the material, reprised “People” as a duet, added “You’re a Funny Girl” from the 1968 movie, and cast Ramin Karimloo in the role of Arnstein. He dominates the second act, and almost singlehandedly makes it worth watching. (Yes, Michele’s reprise of “Parade” at the very end is also pretty terrific.) His character’s emotional and financial downward spiral, which begins almost as soon as the comic “Sadie, Sadie” numbers ends, is heartbreaking. That Karimloo wasn’t nominated for a Tony is just another example of how worthless those awards are.

The soap opera of the second act works even better now that Tovah Feldshuh has taken over for Jane Lynch as Fanny’s mother. Besides helping to bring out the hankies, Feldshuh turns “Who Taught Her Everything She Knows,” danced alongside the great Jared Grimes, into a genuine show-stopper.

What is the opposite of a show-stopper? That would be “Rat-Tat-Tat-Tat,” which remains the musical’s worst number. It is also the one moment in the second act when Fanny is supposed to shed her newly acquired diva persona and return to her burlesque comic roots. Again, when Michele needs to get down and bawdy, all we see is the effort.

Some of the problem is her too glamorous appearance. When Streisand starred in “Funny Girl,” she didn’t look like your typical leading lady. Which is what the role required. Ditto Beanie Feldstein, who was equally playing against type when this revival opened in April.

When Michele is told that her Fanny doesn’t belong in the chorus line with all the other tall and beautiful girls, it’s a problem too easily solved. Get the girl a higher pair of heels. 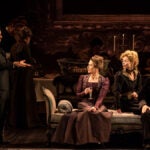