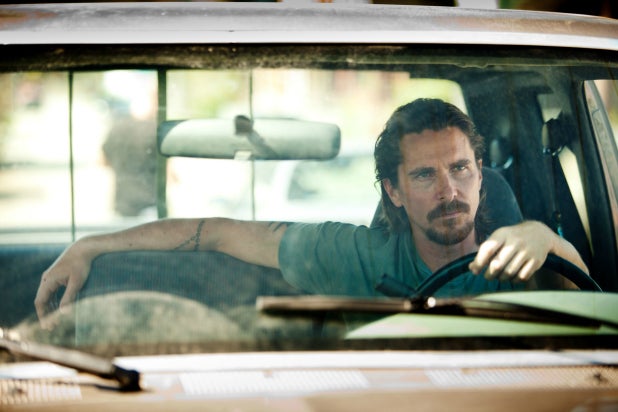 Less a movie than a tour of notecards on Bruce Springsteen’s bulletin board, “Out of the Furnace” revels in blue-collar misery — the mill’s closing down, the veteran can’t get a break — without bothering to make characters out of its types.

Yes, the working class is bearing the brunt of an inequitable economic system, and yes, the treatment of our returning soldiers from the last decade of war has been disgraceful, but the film has nothing of substance say about any of this. Just raising the issues and portraying them as tragic and important isn’t the same as making an actual statement.

Clearly aiming for a 1970s edge — and aping “The Deer Hunter,” in particular — “Out of the Furnace” is a pointless wallow in blue-collar tragedy that ultimately feels condescending to its subjects; each of the players get one or two attributes to play, but ultimately they’re just place-holders in an exceedingly generic story.

In the film’s 2008 prologue, Russell Baze (Christian Bale) works hard at a Pennsylvania steel mill, making money in the hopes of starting a family with girlfriend Lena (Zoe Saldana). Much of that cash gets spent keeping his brother Rodney (Casey Affleck) out of trouble with local small-time crime boss Petty (Willem Dafoe). One night, Russell has one drink too many at Petty’s bar, hits a car and goes to jail for killing two people while driving drunk.

A few years later, Russell gets out, but things have gotten worse — after being stop-lossed into four tours of Iraq, Rodney can’t un-see the horrors he has witnessed, and Lena has moved on, taking up with local cop Wesley (Forest Whitaker). Russell and Rodney’s dad has died, and while Russell has his job back, the cheaper cost of Chinese steel spells doom for the plant.

Rodney gets involved with Petty’s underground fight matches, even though he’s lousy at taking a dive, since his war-honed survival instincts kick in around the time he’s supposed to let the other guy beat him down. Desperate for money, Rodney gets Petty to put him in one last fight, organized by Jersey hillbilly crime lord DeGroat (Woody Harrelson); given that the film opens with DeGroat assaulting first his date, and then the beefy guy who tries to step in on her behalf, at a drive-in, we know this isn’t going to end well.

The cast is excellent and blameless; with the exception of Rodney screaming a litany of the horrors he’s experienced at full volume, they find moments of honesty in this rote material. Unfortunately, in the screenplay by Brad Ingelsby and director Scott Cooper (“Crazy Heart”), those moments never add up to recognizable human beings who resonate.

Bale (whose shoulder-length hair and goatee often make it look like he’s playing Jesus again) carries a haunted look throughout, as a man who’s always trying to do the right thing but who suffers the blows of fate time and again. His handful of scenes with Saldana are among the film’s highlights. Harrelson, Dafoe and Whitaker get saddled with one-note characters, but they certainly know how to play that note.

The film tries to dazzle us with parallel editing — the evisceration of a freshly-killed deer alongside a moment of human brutality, say, or the creation of steel versus the cooking of heroin — but that kind of thing only works when you’ve made the human being a richer character than you’ve made the deer.

On its face, “Out of the Furnace” is a timely story about the world we live in, and its intentions certainly seem to be noble ones. But we all know to which furnace noble intentions can lead.