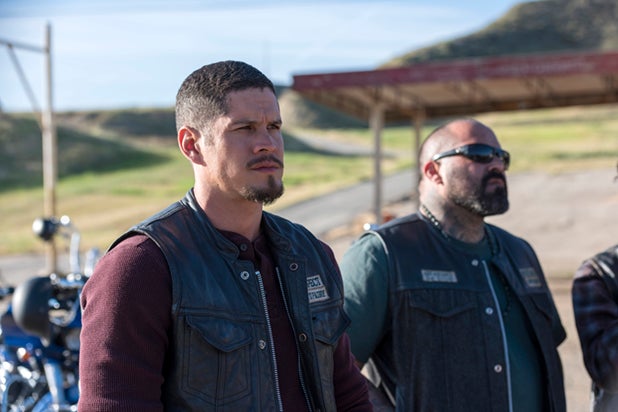 FX has renewed the biker drama “Mayans M.C.” for a third season, the network announced on Monday.

The renewal follows news that co-creator Kurt Sutter had been fired from the series over complaints about his behavior. The network confirmed Monday that Sutter’s co-creator Elgin James will take over as the sole showrunner for Season 3.

The series, which stars JD Pardo, Clayton Cardenas and Edward James Olmos, is set to return in fall of next year.

Also Read: Kurt Sutter Explains Why He Was Fired From 'Mayans MC': 'I Went Rogue'

“We’re happy to continue telling the story of ‘Mayans M.C.’ with our partners at Fox 21 and excited that Elgin James has earned the opportunity to become the series’ showrunner,” said FX president of original programming, Nick Grad. “Kurt Sutter identified and chose Elgin as his partner on the show from the outset and Elgin has been instrumental to the success of the series, leveraging his experience and creative vision to make Mayans M.C. with this incredible cast, crew and creative team.”

News of Sutter’s departure first came when he sent a memo to the show’s staff last month. It was reported at the time that the reason for his termination was complaints about his behavior from the show’s cast and crew, but Sutter denied that account in a follow-up email to his friends and collaborators. He instead pinned the blame on his unwillingness to cooperate with increased levels of corporate control by executives at Disney.

“The truth is, the suits wanted me gone,” Sutter wrote. “I stepped on toes and bruised egos. And in this Disney regime, I’m dangerous to the wholesome brand. And clearly not worth the trouble.”

Sutter had already been planning to step down from his role as co-showrunner on the third season, announcing at the Season 2 premiere that he was handing over day-to-day control of the series to James.

A spinoff of “Sons of Anarchy,” “Mayans M.C.” centers on Ezekiel “EZ” Reyes (JD Pardo), a prospect in the Mayans M.C. charter on the Cali/Mexi border. Once the golden boy with the American Dream in his grasp, EZ is trying to reconcile with his brother “Angel” (Clayton Cardenas) while searching for the truth behind their mother’s death. Meanwhile, their father “Felipe” (Edward James Olmos) is struggling to lead his sons down a righteous path.