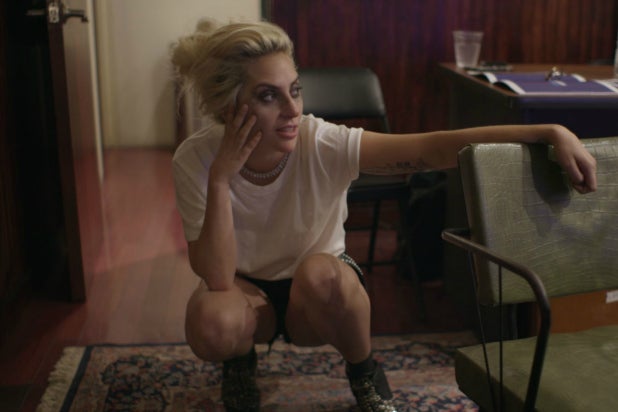 Halfway through Chris Moukarbel’s documentary “Gaga: Five Foot Two,” Lady Gaga sits at a piano in the Rainbow Room at a tribute to Tony Bennett. She sings what is still her best song, “Bad Romance,” belting it out slowly and with feeling while Bennett looks on approvingly. Her talent is clear, but her neediness is even clearer.

Director Moukarbel (“Me at the Zoo”) has edited this movie, which charts the lead-up to Gaga’s performance at the 2017 Super Bowl halftime show, to make it look like she spends most of her time either in tears or on the verge. But maybe this is actually a reflection of her life at this point, for even her work has become mournful. She is shown recording her country-tinged 2016 album “Joanne,” a tribute to her late aunt, who died young.

Gaga is seen visiting her grandmother, who looks like an old-lady version of Gaga herself. Considering how often Gaga breaks down in this movie, it looks like we are going to get a new flood of tears when she plays a track off “Joanne” for her grandmother, but Grandma Gaga is a steadying influence in this scene. “Good luck with all this, dear,” she tells her granddaughter while embracing her. “Don’t become maudlin about this,” she cautions, which is very good advice.

What made Lady Gaga so interesting when she first emerged in 2008 was her sense of psychodrama in the midst of increasing fan adulation; there was an element in her performing style that felt truly disturbed. Her need for attention was very raw, and it seems even more so now. But “Gaga: Five Foot Two” suggests that it is time for this woman to open some windows and let some air into her life and her creativity, and to collaborate. (In this sense, her recent attempt at a jazz album with Bennett was a step in the right direction.)

The camera loves Gaga’s dramatic eyebrows and large eyes staring over her long nose and Streisand-ish mouth, but “Five Foot Two” captures her at a down time in her life, in several senses of that term. She talks a great deal to the camera about having more confidence, and yet her speaking voice often sounds tired and keeps trailing off. Gaga is charming when defending herself against Madonna’s charge that her song “Born This Way” was “reductive,” but her manner is often very low-key here.

Also Read: Lady Gaga Postpones European Tour: 'I Have to Be With My Doctors Right Now'

There are moments in this movie when Gaga has to make her concerns and displeasures known to her collaborators, but these scenes are fairly mild and reasonable. More upsetting are the scenes where we see her deal with medical problems and her persistent pain issues at age 30. (These problems have recently caused her to cancel the European part of her “Joanne” tour, and they might explain her low energy in this movie.) “I sit in an MRI machine for three hours, and then they tell me to take an Advil,” she says. Gaga is expected to work through this pain whenever the adrenaline kicks in for her to perform.

She is fairly open to Moukarbel’s camera and seems to hide nothing from us; she even sits in a chair topless without a trace of self-consciousness. But the director can only provide an audio track of the film’s most painful moment, when Gaga offers an itemized list of how every success she has had professionally is matched by a disappointment in her love life.

After we see a montage of her various outlandish outfits and entrances from the last decade, Gaga tells us that the outsized attention she receives during a given day is often followed by total silence and isolation in her evenings. Given contrasts like this, it becomes clear why so many performers at her level crack; Gaga is indeed sort of a mess in this movie, yet her grandmother’s emotional pragmatism is in there somewhere, too.

Gaga needs to focus on her music, not the glamour and spectacle of her own celebrity — which has exhausted both her and her audience — and she seems to fully know that in “Gaga: Five Foot Two.” For all of her problems here, her ego feels very healthy when she speaks to the camera before going on for her halftime show at the Super Bowl.

Maybe the most revealing moment in this movie is right at the end when Gaga is drilling herself to have fun with this halftime performance. “I look like I want to kill everyone,” she says of her rehearsal footage, and this shows a self-aware performer who will likely survive her own fame.

26. Black Eyed Peas (2011) Before this show, young 'uns were celebrating the end of the halftime show being owned by the "retirement home." Afterwards, the old folks were smugly smirking. The Peas were absolutely abominable, with stiff choreography and mailed-in vocals that made The Who seem 40 years younger. The absolute worst moment came when Slash arrived to save the day, only for Fergie to commit a cardinal sin against rock by mangling "Sweet Child O' Mine." Later in 2011, the Peas' new album got panned, their motion-sensor video game bombed, and by year's end, they announced they were going on hiatus.
View In Gallery