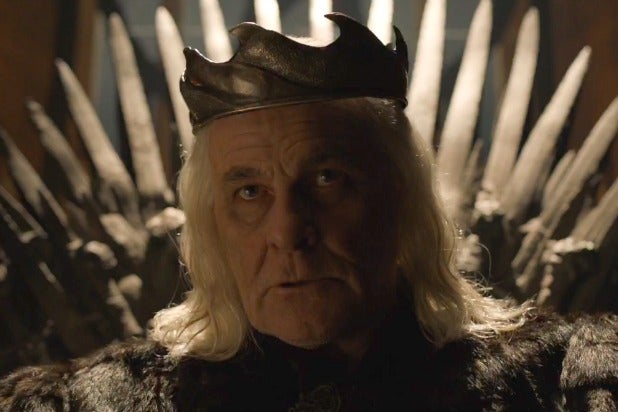 If you’ve been watching “Game of Thrones” for a while, you’ll probably recall plenty of mentions of that time Robert Baratheon and Ned Stark overthrew the Targaryen dynasty and Jaime Lannister murdered the Mad King.

Those events, which took place 17 years before the present-day events of the show, were always important to the fabric of “Game of Thrones” — that old war is why Robert and Cersei were married, for one thing — but in Season 6 the importance of Robert’s Rebellion seems to be growing in more tangible, immediate ways.

Thus far, the show hasn’t delved too much into the particulars of that war — we’ve had the ending discussed numerous times, and in Season 5 Littlefinger described the spark that started it, but most everything in between is a big question mark.

But that’s only how it is on the show. George R.R. Martin‘s written works — including the “World of Ice and Fire” reference book — have sketched out the backstory of “Game of Thrones” much more than the show itself has. And that means we know plenty about Robert’s Rebellion and the long downfall of the Mad King.

And here we’re going to go through that history so you’ll be better equipped to handle any future references “Game of Thrones” decides to throw at you.

Keep in mind, of course, that HBO’s “Game of Thrones” is an adaptation, and the showrunners may take liberties with the source material regarding Robert’s Rebellion, just as they’ve done with the main narrative across six seasons. So think of this as a guide, allowing for the possibility that events could be altered or subverted. Plus, as a very popular fan theory regarding the Mad King asserts, events may not be exactly what they seem.

Though Aerys Targaryen (David Rintoul) is commonly referred to as the Mad King, he wasn’t always mad. Well before the war, Tywin Lannister (Charles Dance) served as Aerys’ Hand of the King. Tywin ran the kingdom well, and Aerys mistrusted Tywin because Tywin was getting a lot of the credit for basically everything being good in the Seven Kingdoms. Aerys had previously declared his intent to be the greatest king the Seven Kingdoms had ever seen, so he got super jealous, and would undermine Tywin whenever he could.

Aerys would also drink a lot, and once made a particularly lewd remark to Joanna, Tywin’s wife, after which Tywin attempted to resign — though Aerys wouldn’t allow it.

Five years before Robert’s Rebellion, Aerys was kidnapped by Lord Denys Darklyn of Duskendale, and held for six months before he was rescued by Ser Barristan Selmy. That kidnapping kinda freaked Aerys out, and he became a recluse, staying in the Red Keep from then on. As an added bonus, Tywin leaving Aerys in captivity for so long only ramped up Aerys’ paranoia toward him.

Aerys finally left the Red Keep for the Tourney at Harrenhal, a jousting tournament won by his son Rhaegar. Tradition stated the winner of the tournament would name a Queen of Love and Beauty — typically the winner’s significant other, if he had one. Rhaegar, however, defied convention and shunned his wife, Elia Martell, instead naming Lyanna Stark the Queen of Love and Beauty.

That didn’t sit well with Robert Baratheon, to whom Lyanna was pledged to be married. Ned Stark would later refer to that as “the moment when all smiles died.”

Some time later, Rhaegar (apparently) kidnapped Lyanna Stark. In response, her brother Brandon Stark and some pals traveled to King’s Landing, where Brandon stood outside the gates and demanded that Rhaegar “come out and die.” Aerys had the group arrested, and called for their fathers to come to King’s Landing and answer for them.

Once the Stark patriarch Rickard arrived, Aerys had him suspended in his armor above a fire, which cooked him alive. He also had Brandon and the rest of his friends, and their fathers, killed, save for one. And then after all that, Aerys (definitely mad as hell at this point) called for the heads of Robert Baratheon and Ned Stark for good measure.

Robert and Ned were at the Eyrie at the time, as both had been fostered by Jon Arryn, and Lord Arryn refused to hand them over. Instead, he raised his banners — the signal for war.

The first order of business for both Robert and Ned was to travel to their respective homes — Robert’s at Storm’s End and Ned’s at Winterfell — to raise their own banners so as to gather those pledged to them to fight. Not all those pledged joined the war on their side, however, as going to war against the Iron Throne was kind of a big deal.

The first big battle was at Summerhall, where Robert’s forces took out the armies of three loyalist lords. This was followed by a battle at Ashford, where loyalist forces under Randyll Tarly (Sam’s father) and Mace Tyrell (father of Margaery and Loras Tyrell) defeated Robert’s troops. From there, Mace attacked Storm’s End.

Meanwhile, Ned had managed to reach Winterfell and raise his banners, at which point he marched south and secured an alliance with House Tully by pledging himself to marry Catelyn Tully, who had previously been pledged to Ned’s late brother Brandon.

Stark and Tully forces arrived at the Stony Sept during the Battle of the Bells just in time to save Robert and his forces from certain defeat at the hands of loyalist forces. Once the Starks and Tullys entered the fray, Robert’s troops counterattacked and won the battle.

At that point, Aerys was convinced to seek help from Tywin Lannister, who had exited his role as Hand of the King some time before. The Lannisters did not respond.

The Battle of the Trident

The biggest battle of the war came at the Trident, where the bulk of both loyalist and rebel forces met on the field. Rhaegar finally showed himself, and Robert slew him with his warhammer. Rhaegar’s armor was encrusted with jewels, and the legend goes that Robert hit him so hard, the hammer smashed them off, scattering rubies in the river at a spot that is now known as the Ruby Ford (there was a reference to this in Season 1). Robert didn’t escape unscathed, though. Rhaegar wounded him pretty badly.

It was around this time that Robert announced that he was gunning for the throne himself — he had some legitimacy thanks to a Targaryen grandmother.

After the Battle of the Trident, the Greyjoys of the Iron Islands decided to get involved on the side of the rebels, though they didn’t accomplish much beyond getting their lord, Quellon, killed in a naval battle at the mouth of the Mander River.

The taking of King’s Landing

At this point, Tywin Lannister showed up at King’s Landing offering aid to King Aerys with all his forces. The Mad King let them into the city, and that decision pretty much ended the war as the Lannister men started sacking the place. The Mad King’s madness also reached its pinnacle.

Also Read: 'Game of Thrones': Everything Bran Stark Saw in His Flashback Montage In 'Blood of My Blood'

The Mad King, as you probably know from watching the show, has instructed the pyromancers to manufacture huge amounts of the volatile substance wildfire, and has stashed them around King’s Landing. When the Lannisters sacked the city, Aerys ordered the wildfire stashes to be ignited, which only added to the chaos. Meanwhile, Jaime Lannister was a member of Aerys’ Kingsguard, and the Mad King ordered Jaime to kill his father, Tywin, while screaming “Burn them all!” over and over again.

Jaime decided to put an end to the madness right there. He killed the pyromancer to stop the wildfire from being ignited, and then killed the Mad King himself. When Ned Stark found him afterward, Jaime earned the pejorative nickname “Kingslayer.”

Lannister forces stormed the Red Keep and slaughtered any member of House Targaryen they could find, including Rhaegar’s children and widow, Elia Martell, who was raped and slaughtered by Gregor Clegaine, better known as the Mountain. (This was the source of Oberyn Martell of Dorne’s vendetta against the Lannisters in Season 4.)

The war was pretty much over after King’s Landing was taken, but there remained some things to deal with. These tasks were left to Ned Stark, who had a falling out with Robert over that whole “murdering of children” thing at the Red Keep.

The first remaining order of business was breaking the siege of Storm’s End by Mace Tyrell, which had been ongoing for nearly a year. At that time, Storm’s End was held by Robert’s brother Stannis, and all the people inside would have starved had Davos Seaworth not managed to bypass the Tyrell blockade with a shipment of onions. Once Ned showed up, the Tyrell forces broke up quickly and Mace Tyrell bent the knee to Robert.

Ned then took a small band to the Tower of Joy, which included Howland Reed, Jojen and Meera’s father. There, Rhaegar had held Ned’s sister Lyanna throughout the war. The last of the Kingsguard loyal to Aerys, Lord Commander Gerold Hightower and Ser Arthur Dayne, Sword of the Morning, guarded the tower. In a tense battle, Ned was able to kill Hightower and, with Howland’s help, defeated Dayne.

When Ned entered the tower, he found Lyanna pregnant and giving birth. The baby survived, but Lyanna died shortly afterward. Ned then marched back to the far north to Winterfell, bringing a baby, which he told everyone is his bastard son, presumably to hide his true identity. As revealed at the end of Season 6, this child of Rhaegar Targaryen and Lyanna Stark would become Jon Snow.

Also Read: 'Game of Thrones': That Ned Stark Flashback, Jon Snow and the Prince That Was Promised

Even though Aerys, Rhaegar, and Rhaegar’s children were dead, the Targaryens hadn’t been completely eliminated. There were still some Targaryens alive — Queen Rhaella and her son Viserys were on the island of Dragonstone when King’s Landing was sacked, and Rhaella was pregnant with Aerys’ child.

With Storm’s End free, Stannis assembled a fleet and sailed toward Dragonstone. Before he arrived, a massive storm ravaged the island, destroying most of the Targaryen ships. It was during this storm that Daenerys was born (thus her “Stormborn” middle name). Rhaella died giving birth. Viserys and baby Daenerys were smuggled to Braavos before Stannis arrived with his fleet and took the island. The two remaining Targaryen children would be protected by loyalists for the next 17 years.

After everything settled down, Robert became king with Jon Arryn as his Hand. Robert married Cersei Lannister to unify the ruling House Baratheon with the rich House Lannister.

Aside from a brief rebellion by the Greyjoys a few years later, everything was calm for the most part from then until “Game of Thrones” begins 17 years later.