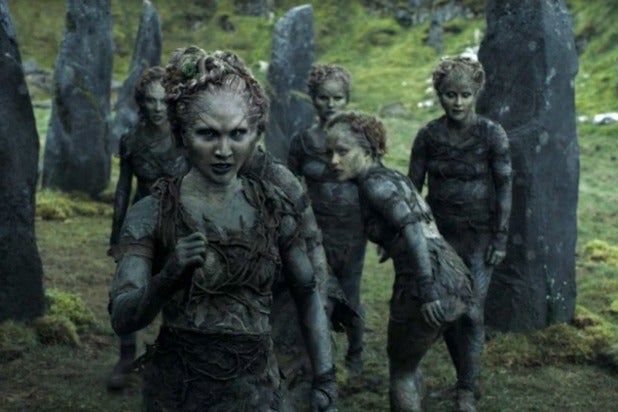 SPOILER ALERT: This post contains spoilers for the May 22, 2016 episode of “Game of Thrones.” If you aren’t ready for them, you should probably back out now.

So much happened in Sunday night’s episode of “Game of Thrones” — from the crowning of a new king of the Iron Islands to Tyrion and Varys’ encounter with a red priestess to, oh yeah, that whole Hodor thing — that you may have already forgotten about the incredibly significant piece of history that was revealed for the first time.

It’s fine, I get it. This season of “Game of Thrones” is moving at a crazy-fast clip, and we’re all in mourning right now. But in the bigger picture, we got what might be the biggest reveal we’ve ever seen on the show, and one that was news even to those folks who are obsessive readers of the “Song of Ice and Fire” novels.

I’m talking, of course, about the origin of the White Walkers, which we witnessed in one of Bran’s forays into the past with the Three-Eyed Raven.

When Bran wakes up, he confronts one of the Children he knows in the present about it. She tells him that they created the White Walkers as a weapon in their war against mankind, which had invaded their territory in Westeros.

This war is one we know about from “A Song of Ice and Fire” lore. It took place in what is known as the Dawn Age, 12,000 years before the events of the show. At that time, the Children of the Forest were the main residents of Westeros, and no men lived there.

But the group called the First Men — that’s a title we’ve heard a million times on “Game of Thrones,” usually as part of the king’s long-winded title, with no explanation — crossed over from Essos and attempted to claim Westeros for themselves. The First Men arrived by way of the Arm of Dorne, which was a land bridge that once connected the two continents at the far southern end of Westeros.

Also Read: 'Game of Thrones': What Exactly Happened with Hodor and That Time Loop?

According to legend, the Children of the Forest took drastic measures to try to stop the First Men, including destroying the Arm of Dorne with magic. They attempted to do the same to Westeros itself by splitting the continent at the Neck, which is where Westeros is narrowest. The story goes that the war was fought for many years, possibly millennia, with the First Men slowly but steadily winning, before a peace was declared around 10,000 years prior to the events of “Game of Thrones.”

The interesting thing here is that according to the timeline it wasn’t until 8,000 years before the show that the White Walkers first emerged from the far north of Westeros, which wouldn’t really jive with the Children of the Forest creating the White Walkers during the war. But there are a couple of pretty easy ways to explain the possible inconsistency.

The first is just that the timeline is wrong. This is part of the fun of “A Song of Ice and Fire” — nobody in the present really knows what happened all those thousands of years before, and there are many different lines of thought on these legends.

The dates in particular are often considered by the maesters to be speculation, and some of the maesters — who are the ones who would know about these things, if anyone does — don’t even believe a lot of this ancient lore actually ever happened.

The whole Arm of Dorne thing, for example, can be chalked up to a goofy superstitious explanation for the island chain that stretches from Dorne to Essos. The point being that the timeline, and all that ancient history as we know it, is flexible because nobody in the present really knows what happened back then.

The second possibility is that this group of Children didn’t trust their peace with the First Men, and they were looking for a way to make a preemptive strike to take back Westeros that really, really backfired on them.

Whatever the explanation, this is an exciting turn of events. And the thematic implications — mankind brought this on itself by going to war with the Children — is very interesting. Let’s hope we dive more into this as the series moves on.