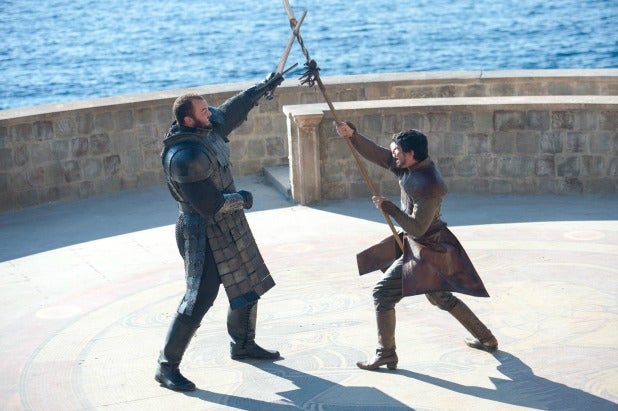 (Spoiler alert: Don’t read this if you don’t want to know what happened on Sunday’s episode of “Game of Thrones,” entitled “The Mountain and the Viper.”)

“Game of Thrones” has broken our hearts again.

Sunday’s episode brought us the trial by combat between the characters in its title, “The Mountain and The Viper.” They staged a thrilling-and-then-depressing battle to decide the fate of Tyrion Lannister.

Also read: Game of Clones: ‘Game of Thrones’ Characters and Their Doppelgängers (Photos)

The Viper, an affectionate nickname for Tyrion’s champion, Oberyn Martell, developed an endearing tic this episode. Like “The Princess Bride” swordsman Inigo Montoya, who had a special speech for the Six-Fingered Man who killed his father, Oberyn had some lines he kept repeating to the Mountain.

By the end of the episode, we were all painfully aware of the Mountain’s crimes.

“You raped her,” Oberyn said. “You murdered her. You killed her children.”

It was more than a little reminiscent of Inigo’s simple, “My name is Inigo Montoya. You killed my father. Prepare to die.”

If haven’t seen “The Princess Bride,” you might want to watch it soon, to restore the happiness you no doubt lost during Sunday’s “Game of Thrones.”

Because the speech thing worked out a lot better for Inigo than it did for Oberyn.

He leveled the mountain, but failed to finish him off. Perhaps he was too insistent on a confession. As he demanded one, the Mountain managed to take him down. He admitted everything as he jammed his thumbs into Oberyn’s eyes and smashed his skull. And with that, Tywin Lannister handed down a death sentence for Tyrion.

The episode was kind of a downer, in other words.

It was eventful and entirely pleasing until the final moments: We learned Tyrion and Jaime’s idiot cousin wasn’t a beetles fan. Daenerys banished Ser Jorah after deciding his skills as a sommelier didn’t make up for his past as a spy. Sansa came to Littlefinger’s defense, brilliantly. The Stark sisters are on the verge of a reunion. Ramsay Snow lost his bastard status and got a new name. And Tyrion had a brilliant ad lib.

At the sight of the massive Mountain, Oberyn opined: “Size doesn’t matter when you’re flat on your back.”