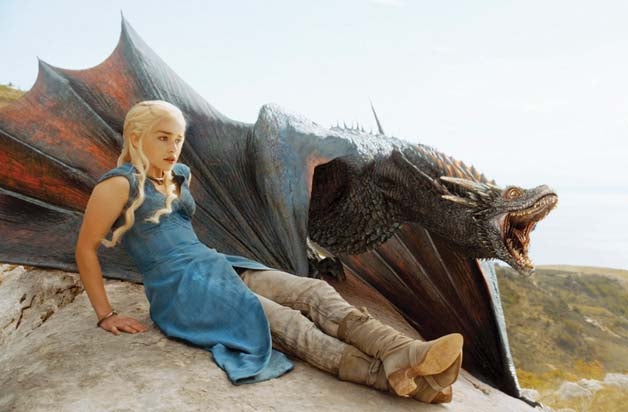 HBO’s fantasy epic “Game of Thrones” dominated the Emmy nominations on Thursday, receiving nominations in 24 categories, including the Best Drama Series crown that has eluded the show since it premiered in 2011.

HBO led all networks with 126 nominations total, followed by ABC with 42 and NBC and CBS, each with 41.

The TV academy also took strikes to broaden its nominations, in terms of recognizing new shows and stars that reflect the broader and more diverse television landscape.

Two African American stars of new series, Viola Davis in ABC’s “How to Get Away with Murder” and Fox’s Taraji P. Henson in “Empire,” are competing for Best Actress in a Drama. Kerry Washington, a two-time nominee for “Scandal,” did not make the cut this year.

In addition, half the nominees in the lead acting categories were either first time nominees or nominated for their current shows for the first time.

In addition to Davis and Henson, that includes Kyle Chandler for “Bloodline,”  Tatiana Maslany for “Orphan Black,” Bob Odenkirk for “Better Call Saul” and Liev Schreiber for “Ray Donovan.”

In the Best Drama race, “Game of Thrones” was joined by previous nominees “Downton Abbey,” “Homeland” and “House of Cards.” Also nominated: “Better Call Saul,” the prequel to “Breaking Bad” that wrapped its first season, and “Orange Is the New Black,” a nominee last year for Best Comedy that now competes in the drama race due to a change in the rules.

In one of the biggest snubs of the year, Julianna Margulies was left out of the Best Drama Actress race, even though she took home the award in last year’s race. Edging her out of the competition this year were Davis, Henson, Maslany, Claire Danes for “Homeland” and Elisabeth Moss for “Mad Men.”

In Best Drama Actor, Chandler, Odenkirk and Schreiber were joined by Jeff Daniels for “The Newsroom,” Kevin Spacey for “House of Cards” and Jon Hamm for the final season of “Mad Men.”

The Best Actor in a Comedy race includes three newcomers: Anthony Anderson for “Blackish,” Will Forte for “Last Man on Earth” and Jeffrey Tambor for “Transparent.” The’ll compete against Louis C.K. for “Louis,” Don Cheadle for “House of Lies,” Matt LeBlanc for “Episodes” and William H. Macy for “Shameless.”

Also Read: 33 Emmy Contenders Answer: Who Deserves an Emmy And Why? (Photos)

Actresses vying for Best Comedy Actress are Edie Falco for “Nurse Jackie,” Lisa Kudrow for “The Comeback,” Julia Louis Dreyfus for “Veep,” Amy Poehler for “Parks & Recreation,” Amy Schumer for “Inside Amy Schumer” and Lily Tomlin for “Grace and Frankie.”

The TV academy split the variety series category, with one award for talk shows and one for sketch-driven series. That sets up a showdown between two longtime hosts who ended their shows this year: David Letterman for CBS’ “Late Show,” and Stephen Colbert for Comedy Central’s “The Colbert Report.”

“Orange Is the New Black” star Uzo Aduba and “So You Think You Can Dance” host Cat Deeley announced the nominations Thursday morning, and both landed nominations themselves.