“Patriot” creator Steve Conrad has been set as the writer of HBO’s “Game of Thrones” prequel “Tales of Dunk and Egg,” TheWrap has learned.

Conrad, who is also known for his work on Epix’s “Perpetual Grace, LTD,” would pen the script for the potential series and also executive produce the project. 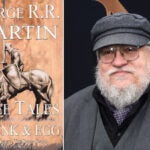 Also Read:
‘Game of Thrones’ Prequel ‘Tales of Dunk and Egg’ in the Works at HBO

HBO declined to comment Conrad’s addition as writer and representatives for Conrad did not immediately respond to TheWrap’s request for comment.

If the “Dunk and Egg” prequel were ordered to series at HBO, it would mark the second “GoT” spinoff to get the green light, the first being the upcoming series “House of the Dragon,” which focuses on the Targaryen family.

Previously, HBO had multiple “Game of Thrones” spinoffs in the works before the original show came to an end, and it appeared one led by Naomi Watts might be ordered to series, after being the only one to produce a pilot. However, the premium cable channel ultimately passed on that show and soon after announced “House of the Dragon” was a go.

Currently, “House of the Dragon” is set to premiere some time next year and HBO is said to be listening to pitches for other “GoT” spinoffs.