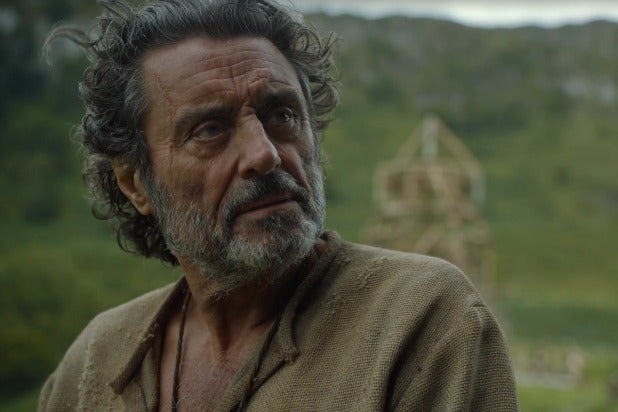 (Spoiler alert. The following contains spoilers for the June 5, 2016 episode of “Game of Thrones,” “The Broken Man.” Just so you know.)

Season 6 of “Game of Thrones” has been a non-stop, rock-‘em-sock-em affair so far, coming at fans so fast hardly anybody can take a breath without getting stabbed suddenly.

So it was quite a surprise when the seventh episode of the season, “The Broken Man,” opened with probably the most extreme possible change of pace: a group of people working together to build a church, with none of them looking to do any violence to anyone else.

That surprise was heightened when we learned that one of the residents of this peaceful place was none other than the Hound, Sandor Clegane, who we last saw in season 4 , when Arya left him to die on a rock after Brienne of Tarth had beaten him mostly to death.

But now the Hound is back, doing manual labor with a man called the Elder Brother (played by Ian McShane), of the Faith of the Seven, the major religion of the Seven Kingdoms of Westeros.

So what exactly is this magical place where everybody just peacefully coexists? This is the Quiet Isle, in the Bay of Crabs near the mouth of the river Trident. The Elder Brother runs the place, and they essentially have a co-op there, with penitents looking for redemption away from the chaos of the rest of Westeros.

For the Hound, it’s perfect — manual labor instead of murder is exactly what he needs. In “The Broken Man,” they appear to be building a sept, or church.

The depiction of the Quiet Isle is somewhat different from that of the novel “A Feast for Crows,” in which those who live on the island take a vow of silence while they’re there (aside from the Elder Brother). The Hound speaks freely during his scenes, and no mention is made of a requirement that residents remain silent. In the novel, the isle already has a sept, also, and women aren’t allowed to live there — though they can visit. Our brief glimpses at the Quiet Isle don’t tell us enough to make the distinction.

The circumstances under which we visit the Quiet Isle on “Game of Thrones” is certainly unlike that which we first learned of it in “A Feast for Crows.” In the book, Brienne of Tarth visits the island, as she searches for the Stark daughters Sansa and Arya.

Also Read: 'Game of Thrones' 101: All About The 'CleganeBowl' Theory

Brienne meets the Elder Brother and tells him of her mission, and he tells her that he had found the Hound nearly dead and attempted to nurse him back to health but failed. Brienne notices a gravedigger on the island who has a limp and a similar build to the Hound, and fans have long suspected the Hound to be that gravedigger.

The novel also gave us more about the Elder Brother’s history than we received in the episode. The Elder Brother fought for the Targaryens during Robert’s Rebellion, and he fell at the Battle of the Trident and was left for dead. The river washed his body down to the Isle, where he lived in silence for ten years.

Also Read: 'Game of Thrones': What Did Queen Margaery's Note to Her Grandmother Mean?

On “Game of Thrones,” of course, all good things must come to an end at some point. For the Quiet Isle, that end came quickly, as the Lord of Light-worshipping Brotherhood Without Banners raided the peaceful community and slaughtered all its inhabitants, including the Elder Brother. All except the Hound, who was out chopping wood when the Brotherhood came. And now the Hound is out for revenge, just like the old days.

How does the Hound stack up against the other major characters on “Game of Thrones,” both alive and dead? Check out our character rankings below.