(This post contains some minor spoilers for season 8, episode 2 of “Game of Thrones”)

It has been so long since Jon Snow’s (Kit Harington) direwolf Ghost has figured into major events on “Game of Thrones.” Like it’s been multiple seasons now. And yeah, we know that it’s a whole ordeal for the tech folks who work on “Game of Thrones” to make use of the gigantic dog, but it’s still painful because he’s such a good boy and we love watching him rip the throats out of Jon’s enemies like he’s some kind of canine MacGruber.

And frankly it’s been a little bit obnoxious how long it’s been since we last saw Ghost. He’s been out of the picture for almost a couple seasons now, just kinda hanging out at Winterfell doing nothing with Jon traipses around Westeros. You’d think Ghost would have been a huge asset when Jon and his crew went beyond the wall last season, but nope, Ghost was nowhere to be found even then.

Also Read: 'Game of Thrones': Did Bran Just Hint That the White Walkers Will Win the War?

But it looks like Ghost’s time on the sideline is finally coming to an end as the White Walkers and the army of the dead approach Winterfell. You can’t very well leave Ghost out of this fight, since it’s coming to where he is — and it feels like “Game of Thrones” is broadcasting that Ghost will be involved in the battle next week by giving him a very brief appearance in this week’s episode.

That appearance came when Jon and Sam (John Bradley) were hanging out on the Winterfell wall chatting about whether Jon had told Daenerys about his true identity yet. I know I put the shot up at the top but I’m gonna add it again here just because I can. 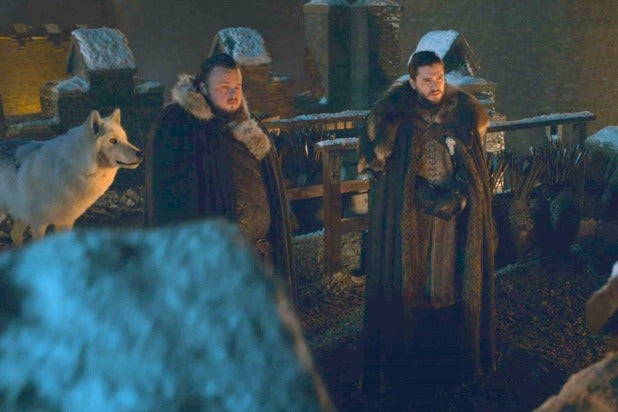 Look at that good boy right there. I’m excited to see him rip some dead people to shreds next week. Most of the dead people don’t have throats to rip out, because they’re just skeletons, but I’m sure Ghost can make do with what he’s got to work with. I just hope “Game of Thrones” doesn’t punctuate his long absence by killing him off next week. That would be a real shame.