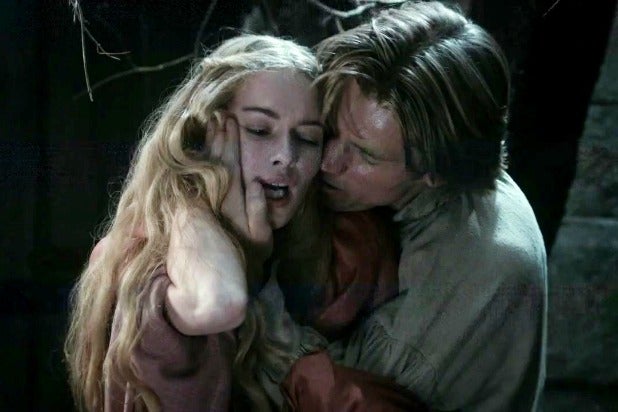 “Game of Thrones” has finally punished a rapist.

Jaime Lannister’s assault on his sister earlier this season has become so scrutinized that the New York Times examined the issue on Saturday’s front page. Many fans are concerned that the HBO show may have tacitly approved of the rape — which does not occur in the books on which the series is based — because Jaime had become a sympathetic character in the episodes leading up to it. His victim, Cersei, has mostly been a villain.

See photos: Game of Clones: ‘Game of Thrones’ Characters and Their Doppelgängers

Worse, the director of the episode said in interviews that the rape eventually became consensual, which seemed to feed into the extremely damaging notion that no doesn’t really mean no, or that women who say no just need to be convinced.

The rape was two weeks ago. Last week, a hater of the highborn named Karl (Burn Gorman) led a merry band of rapists in their unrelenting assault on the women of Craster’s Keep.

This week, justice finally came to Karl. After he threatened to assault the captured Meera Reed, the heroic Jon Snow arrived to save her. But one of Karl’s prisoners ended up saving Snow, who finally put a sword through Karl’s mouth. The penetration paralleled his own violations. It felt good to see him die.

Also read: Where ‘Game of Thrones’ Draws the Line: Sex With Kids

Except: “Game of Thrones” isn’t responsible for meting out justice.

Some stories show good people overcoming injustices, and reassure us that all is right with the world.

But the more powerful stories may be the ones where the injustices go unpunished.

Before “Game of Thrones” Sunday, I watched an advanced screener of another HBO production, Ryan Murphy‘s AIDS drama “The Normal Heart,” which airs May 25.

I don’t want to ruin anything for you, but anyone who remembers AIDS in the 1980s knows the decade was horrible for those with the disease, and the people who loved them. “The Normal Heart” shows how societal shaming kept many gay men closeted, forcing them to fight the epidemic with both hands tied behind their backs. The government agencies that should have been shamed were allowed to go unpunished for what was, at best, profound negligence.

So “The Normal Heart” does not have a happy ending. None of the many people who let other people die are ever punished. But that doesn’t mean Ryan Murphy thinks they did the right thing.

The burden is on us, the viewers, to complete the story. To be angry and fight, not just outright evil, but also negligence and apathy. Not just in terms of AIDS, but always.

So maybe Cersei’s rape, an allegorical atrocity on a TV show, will be avenged. Maybe not. We don’t control what happens in Westeros, a brutal world where rape seems so commmonplace that women don’t bother trying to have their rapists punished, and many men look at rape as just another spoil for the victors. With a few exceptions — Jon Snow among them — men do nothing to change the status quo.

But we do live in a real world, which is, in many ways, exactly like Westeros: The Rape, Abuse and Incest National Network says 60 percent of rapes in the last five years were not reported, and that only 3 percent of rapists will ever spend a day in prison. Those numbers come from Department of Justice statistics, and did not happen to appear on the front page of Saturday’s New York Times.

We have the same responsibility watching “Game of Thrones” that we always do when we see injustice on a screen: Be better than this. We don’t have to wait for a TV show to right wrongs. And it’s ridiculous to project our energy and anger at a work of fiction when there are so many real injustices in our real lives.

“Game of Thrones” doesn’t actually decide what happens next.