Gangsta Boo, a member of the Oscar-winning rap group Three 6 Mafia, was found dead at a Memphis home on New Year’s Day, Bandmate DJ Paul confirmed to People on Monday.

According to Memphis’ Fox affiliate WHBQ, Boo, who was born Lola Chantrelle Mitchell, was found dead around 4 p.m. on Jan. 1. No cause of death has been released.

Missy Elliott tweeted a photo of the late rapper with the caption, “Rest Peacefully,” while Drake posted a picture of her in an Instagram Story and wrote, “Rest in heaven, Gangsta Boo,” WHBQ reported.

Koca Moscato, daughter of former Three 6 Mafia member Crunchy Black wrote on Instagram, “RIP to my auntie Gangsta Boo. This was the worst news I could’ve woke up to. She really had us calling her unk cause it was cooler. She was the coolest.”

Boo began rapping at age 14 and joined local hip-hop collective Three 6 Mafia at age 15. She left the group to focus on solo material in the early 2000s, shortly before members DJ Paul (Paul Beauregard) and Juicy J (Jordan Houston) and outside songwriter Frayser Boy (Cedric Coleman) won the Best Original Song Oscar for “It’s Hard Out Here for a Pimp” from Craig Brewer’s “Hustle & Flow.” It was the second rap song to win the category after Eminem’s “Lose Yourself,” and the first to be performed on the Oscar telecast.

Gangsta Boo guested on tracks with artists including Eminem, OutKast, Lil Wayne, and had a successful solo career: Her debut solo album, “Enquiring Minds, hit no. 15 on the Billboard R&B/Hip-Hop chart in 1998. 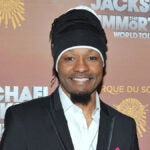