I knew that that casting of my new film, "Gangster's Paradise: Jerusalema," was never going to be easy.

First off, we had to find credible actors who had to play younger and older versions of Lucky Kunene — who starts off with simple smash and grabs and petty crime but, in his quest to escape the slums, graduates to more aggressive heists such as armed robbery and carjacking. And the same was true of the other leads.

That in itself is hard enough in an ideal situation — which this was not. In South Africa we have 11 official languages, and we had to make sure that we did not have actors who just looked similar but actors who spoke the same language. 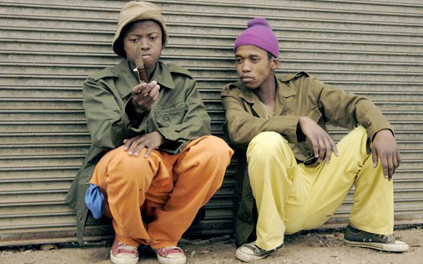 As my linguist and script editor, and associate producer, Mtutzelu Matshoba, told me, it would be like having the younger version of a character speaking French as a kid, then somewhere in the middle of the film we flash forward and he’s a Spaniard.

This complication alone was making my head spin.

And to complicate matters further, we were competing with "Blood Diamond," a big Hollywood mega-production that was sucking up every available actor to fill bit parts. Actors would sign on for lead parts in our film, then jump ship when given the opportunity to do a scene with Leonardo DiCaprio and a herd of goats.

Then there were the financial considerations. The foreign productions were paying substantially more than what we had budgeted. I had one disgruntled actor complain, saying that he was used to earning triple the rate we paid. I tried telling him that given their budget was 50 times more than ours, they were in fact the ones short changing him. It did not work.

I suppose meeting Rapulana Simpiwe was the biggest stroke of luck I had in the entire production. Not only was he a fantastic actor, formally trained and with a background in theater, he was also a huge star from South African soap operas. He’s a household name.

I asked Rapulana if he was going to be doing any of the American films. He shook his head, “I don’t want to be the guy, standing next to the guy standing next to Nick Cage who yells, "Look out!" then gets shot in the head.” I smiled, he went on, “That’s not what I do."

He was my kind of actor. We were a week away from shooting and I had a leading man, and someone I knew could act the hell out the piece. ButI  still had no younger Kunene, and time was getting tight.

Then Jafta Mamabolo walked into the office. A dead ringer for Rapulana. Same good looks, same easy charm and infectious smile. But did they speak the same language? Mtutuzeli looked at me and smiled. "I’ll sort it out," he said.

Jafta felt he could do a reasonable impression of Rapulana even though even on the first day they had not met. He based his decision by seeing Rapulana on television.

The script had been written in English. Mtutuzeli had translated it into seven different languages. Then he would set about tailoring it to each individual actor.

So Jafta had the first lines and spoke in Tswana, and Gladys — even though claiming the age and seniority advantage — had to follow suit.

Mtutuzeli did an amazing job of working with every individual actor to tailor their dialogue to what was most comfortable and authentic. The key was Tsotsi Taal, a kind of a street slang that is spoken in the townships and works as a cross platform for communication, using common words from different Africa languages and knitting them together with English and Afrikaans.

Salamina, my script supervisor, also kept the younger and older actors in line and made sure that the language spoken flowed smoothly from one scene to the next.

About 50 percent of the film was in English and the other 50 in African languages that I could barely understand. At one point in the shooting, Rapulana looked over me and said, “We could be saying anything, we could be talking about you.”

I looked over at Mtutzeli and Salamina. He was listening intently, and she was writing down every word.

“No chance” I said. I was in good hands.

BIO Ralph Ziman
Ralph Ziman was born in Johannesburg, South Africa, where he worked as a news and documentary cameraman. In the early ‘80s, he moved to the U.K. and currently lives in Los Angeles. He has directed over 400 videos for artists as diverse as Ozzy Osbourne, Elton John, Toni Braxton, Michael Jackson and Shania Twain, and two feature films, “Hearts and Minds” and “The Zookeeper.” His latest film, “Gangster’s Paradise: Jerusalmea,” is an unflinching look into the crime, corruption and the transgressions of those looking to survive in the most crime-infested district of Johannesburg.

Ralph Ziman was born in Johannesburg, South Africa, where he worked as a news and documentary cameraman. In the early ‘80s, he moved to the U.K. and currently lives in Los Angeles. He has directed over 400 videos for artists as diverse as Ozzy Osbourne, Elton John, Toni Braxton, Michael Jackson and Shania Twain, and two feature films, “Hearts and Minds” and “The Zookeeper.” His latest film, “Gangster’s Paradise: Jerusalmea,” is an unflinching look into the crime, corruption and the transgressions of those looking to survive in the most crime-infested district of Johannesburg.
x
Looks like you're enjoying reading