Rackiewicz will lead a global team that will drive the company’s data strategy and growth analytics across its business units. He begins his role today, reporting to the Mayur Gupta, Gannett’s chief marketing and strategy officer.

“His experience building and executing revenue-generating data science solutions will truly benefit our organization as we seek to holistically strengthen and leverage our data to drive business growth and enhance how we engage our valued subscribers,” Gupta said in a statement. 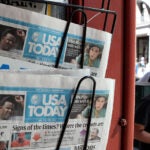 Rackiewicz comes from 20 years of experience in the data field, working previously at A+E Networks and HBO to lead their consumer and data analytics efforts. In his most recent role at gaming publisher Take-Two Interactive, Rackiewicz served as head of analytics and built a competitive intelligence platform aiming to increase revenue for the company.

“I am thrilled to be joining Gannett and spearheading data operations during such a pivotal time for the business. Gannett is transforming from a legacy publishing company to a customer-obsessed, subscription-led content platform and I am looking forward to leveraging data and analytics to inform our success and growth,” Rackiewicz said in a statement.

At HBO, he held a leadership role in which he created a software development outsourcing program that focused on the media supply chain in launching HBO GO. The program expanded to HBO NOW and generated more than 1 million subscribers and some $180 million in revenue within one year.

Gannett, like many legacy media companies, have been doubling down on content strategies to drive more subscriptions. The parent company owns USA Today and local media organizations throughout 46 states, as well as Newsquest, a subsidiary in the United Kingdom with more than 120 local news brands. Gannett also owns digital marketing services company including ReachLocal, Upcurve and WordStream.

In 2020, subscription growth rate for digital news and media grew 110% from March to May compared to the previous year, according to subscription software company Zuora. Many major news publishers saw subscriptions and traffic spike throughout the year’s coverage around the U.S. elections and global pandemic.