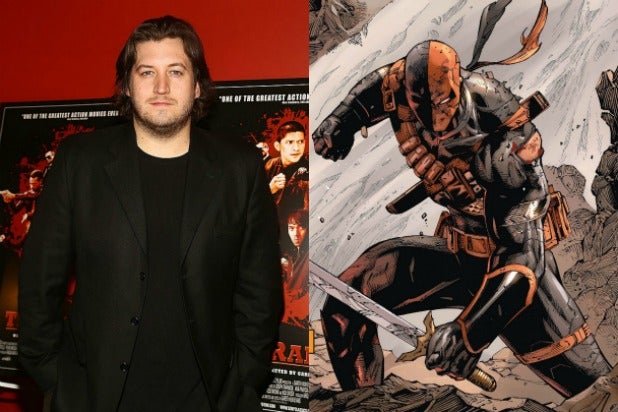 “True Blood” and “Magic Mike” star Joe Manganiello is attached to star. Deathstroke was previously attached to be the antagonist on the solo “The Batman” film when Ben Affleck was still attached to direct. “He’s a great villain because — I just had an instinctive feeling that he would match up with him well. You know, I’m a big admirer of that character as well, especially in the New 52 the way that they did Deathstroke, and I thought that it could work,” Affleck told Collider.

Last year, Affleck posted a cryptic tweet of Joe Manganiello as Deathstroke walking ominously toward the camera, which set of a frenzy of speculation.

After Affleck stepped down and Matt Reeves was hired to direct “The Batman,” Reeves shelved Affleck’s script and started over. Evans who initially passed on directing “Justice League Dark,” however impressed DC executives with his Deathstroke pitch that the company decided to go forward with a spinoff film.

Deathstroke was created by Marv Wolfman and George Perez. He is a mercenary and assassin who first appeared in “The New Teen Titans” #2 back in 1980. Wizard magazine rated him the 24th greatest villain of all time.

In 2009, Deathstroke was ranked as IGN’s 32nd greatest comic book villain of all time. Deathstroke, also known as Deathstroke the Terminator or simply Slade, is known to be the greatest assassin in all of DC Comics.

Also Read: What You Need To Know About Deathstroke, The Next Batman Villain

Deathstroke was meant to be a one-off villain for the Teen Titans, his story being that he took over a contract to kill the team after his son succumbed to his own superhuman enhancements. Instead, he became so popular that he ended up evolving into one of the Titans’ most frequent adversaries.

The character became so popular that in 1991 that DC gave him his own series, in which he fought Batman for the first time. In the four-part series “City of Assassins,” Deathstroke takes on more of an antihero bent as he uses brutal, Punisher-esque tactics to go after a Gotham City mob boss. His hunt puts him on a collision course with Batman, whom Deathstroke actually defeats in combat. Later, the two form an uneasy alliance to root out a masked assassin who killed one of Commissioner Gordon’s men.

Now, as part of its “Rebirth” initiative, DC is giving Deathstroke another comic of his own, but while the ’90s series treated him as an antihero, this new line shows Deathstroke as the coldest mercenary you can imagine. He jumps from one contract to another, killing people without hesitation. When he’s not on the job, he’s getting into fights with his wife and abusing his kids, the latter of whom end up taking alter egos of their own.

Evans exploded onto the scene after he wrote and directed the 2011 action film “The Raid: Redemption” that starred Iko Uwais. The movie was praised for its unique action sequences and thrilling scenes, and was acquired for the U.S. by Sony Pictures Classics. The sequel, “The Raid 2” also written and directed by Evans, was released in 2014.

Evans next up has period thriller “Apostle,” about a mysterious man who travels to a remote island and attempts to rescue his sister after she’s kidnapped by a religious cult. Netflix is distributing “Apostle.”

Evans is repped by WME and Management 360.