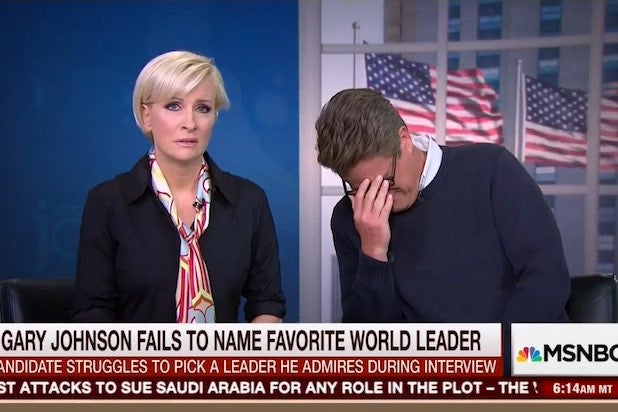 “Morning Joe” co-host Joe Scarborough mocked former Gov. Gary Johnson on Thursday for having what the Libertarian candidate described as “another Aleppo moment” during an MSNBC town hall event when he couldn’t name his favorite foreign leader.

“He could not name a leader — living or dead, past or present,” Scarborough said on the MSNBC morning show the day after the town hall aired. “How does somebody think they’re going to run for President and be this ignorant? Completely ignorant of the most basic things. My children can answer those questions.”

“I guess I’m having an Aleppo moment in the former President of Mexico,” Johnson said. When moderator Chris Matthews pressed the politician to name “which one,” Johnson said he was “having a brain fart.”

Former Massachusetts Gov. Bill Weld, who is running for vice president alongside Johnson on the Libertarian ticket, began rattling off the names of Mexican presidents, prompting Johnson to say Vincente Fox “was terrific.”

But it was too little, too late for viewers who were just as stunned as the entire “Morning Joe” team, including Mika Brzezinski and Willie Geist.

Geist said he was “astounded” by the moment, and thought Johnson might have actually been high during the town hall.

“I know he’s for legalizing pot, so I actually looked up, and he told USA Today in June that he had not smoked weed at that point for seven weeks, and he would not smoke during the campaign, he would not smoke as President,” Geist said to laughter from the rest of the panelists. “I’m dead serious, because I thought, you know, it happens. We’ve all been there. But he says he’s not smoking weed.”

Also Read: How Gary Johnson and Jill Stein Can Make It to the Presidential Debate Stage

“So that makes it even worse,” Scarborough said.

There was some good news for Johnson on Thursday morning, though. The Detroit News editorial board endorsed the Libertarian candidate, marking the first time in the newspaper’s 143-year history that its editorial board has endorsed a presidential candidate who wasn’t a Republican.

“Since its founding in 1873, The Detroit News has backed a Republican every time it has made a presidential endorsement (three times we have sat on the sidelines — twice during the Franklin Roosevelt elections and in the 2004 Bush/Kerry contest),” reads the endorsement. “We abandon that long and estimable tradition this year for one reason: Donald J. Trump.”