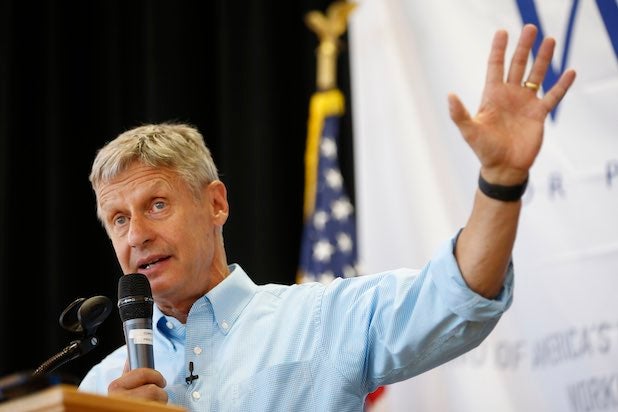 Gary Johnson just scored another major endorsement from the media. The Chicago Tribune has recommended the Libertarian presidential candidate to its readers a day after the Detroit News did the same.

The Tribune called the former governor of New Mexico “a principled option” for President of the United States, since the paper is adamantly opposed to “bombastic and self-aggrandizing” Donald Trump, and has “serious questions about honesty and trust” regarding Hillary Clinton.

“Taken together, Trump and Clinton have serious flaws that prevent us from offering our support to either of them. Still, come Nov. 8, tens of millions of Americans with make a draw that they consider beyond distasteful,” the Tribune’s editorial board wrote. “We choose not to do that. We would rather recommend a principled candidate for president — regardless of his or her prospects for victory — than suggest that voters cast ballots for such disappointing major-party candidates.”

Also Read: How Gary Johnson and Jill Stein Can Make It to the Presidential Debate Stage

The Tribune praised Johnson and his running mate, former Massachusetts Gov. William Weld, as “agile, practical and, unlike the major-party candidates, experienced at managing governments.”

“They offer an agenda that appeals not only to the Tribune’s principles but to those of the many Americans who say they are socially tolerant but fiscally responsible,” the endorsement continued before addressing the biggest hurdle any third party candidate faces.

“We reject the cliche that a citizen who chooses a principled third-party candidate is squandering his or her vote,” the editorial board wrote. “Look at the number of fed-up Americans telling pollsters they clamor for alternatives to Trump and Clinton. What we’re recommending will appeal less to people who think tactically than to conscientious Americans so infuriated that they want to send a message about the failings of the major parties and their candidates.”

If anybody reading this is wondering what a Liberatrian is, the Tribune offered this Johnson quote: “Most people are Libertarian. It’s just that they don’t know it.”

Fox Business host John Stossel identifies as a Libertarian, and told TheWrap ahead of a town hall in August that his party is made up of people who believe Americans “should be allowed to do anything that is peaceful.”

But here are some specifics: Johnson said during a CNN town hall event recently that he is not in favor of the U.S. intervening in foreign conflicts, because he believes it only results in hostile groups like ISIS, and is in favor of legalizing marijuana, and is very sympathetic to the Black Lives Matter movement, which he said served as a personal wake up call to the civil rights issues that still exist in the U.S.

“I think we’ve all had our heads in the sand. Let’s wake up,” he told Anderson Cooper. “This discrimination does exist, it has existed.”

Endorsements from the Chicago Tribune and Detroit News are highlights in a series of lows that have plagued Johnson’s campaign recently. First he was hammered by pundits for asking “What is Aleppo?” during an MSNBC interview when asked about the trouble in Syria, and then again this week when MSNBC’s Chris Matthews asked him to name his favorite foreign leader.

“I guess I’m having an Aleppo moment in the former President of Mexico,” Johnson said. “I’m having a brain fart.”

Once his memory was refreshed by Weld,  Johnson said he thinks Vincente Fox, the President of Mexico between 2000 and 2006, “was terrific.”

Oddly enough, Johnson didn’t seem too concerned about either of the on-air gaffes. And perhaps it’s because he thinks telling the truth is more important than knowing the facts.

Also Read: Who Is Gary Johnson? Jimmy Kimmel Has Trouble Finding Anyone Who Knows (Video)

“‘If you tell the truth, you don’t have to remember anything.’ That’s been a credo of mine forever. If you tell the truth, that means you’ll admit mistakes,” Johnson said during the CNN town hall. “You make plenty of mistakes, but how often is a mistake made worse just because of they the denial of the mistake? And there’s no way to get after fixing something, than acknowledging it.”

The Tribune concluded its endorsement of Johnson with this statement: “This year neither major party presents a good option. So the Chicago Tribune today endorses Libertarian Gary Johnson for president of the United States. Every American who casts a vote for him is standing for principles — and can be proud of that vote. Yes, proud of a candidate in 2016.”