Gary Oldman is a cranky MI5 agent saddled with “absolute losers” in the first trailer for spy series “Slow Horses,” which Apple TV+ released on Wednesday.

The six-episode series is based on Mick Herron’s first novel in the “Slow Horses” series, with the first two episodes debuting globally on April 1, followed by one episode every Friday. 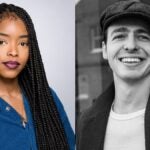 Oldman stars as Jackson Lamb, the brilliant but bitter veteran spy who ends up at the “Slough House,” a department of MI5, where agents who’ve made career-ending mistakes are relegated. It’s a dead-end where no interesting cases ever arise, until Jack Lowden’s still ambitious agent sees an opportunity to get back in the game.

Oldman takes a bit of pride in the group he oversees, telling Kristin Scott Thomas, “They’re a bunch of absolute losers. But they’re my losers.”